Jurgen Klopp could be without as many as six first-team players when Liverpool take on Everton at Goodison Park on Saturday.

The 231st Merseyside will kick off the latest gameweek of the Premier League as Everton and Liverpool meet for the third time this season at Goodison Park on Saturday. Jurgen Klopp seemed to be in buoyant mood following his side’s big win over Manchester City, but he has a few injury problems hampering his preparation for the derby.

The Liverpool boss will be without the likes of Emre Can (back), Adam Lallana (hamstring), Joel Matip (thigh), Ragnar Klavan (match fitness) and Joe Gomez (ankle), while Mohamed Salah is a major doubt after sustaining a groin injury in the Champions League win.

At the back, with the likes of Matip, Klavan and Gomez on the treatment table, the back four pretty much selects itself. The likes of Trent Alexander-Arnold, Dejan Lovren, Virgil van Dijk and Andrew Robertson should all, thus, retain their places, with Loris Karius likely to start between the sticks once again. 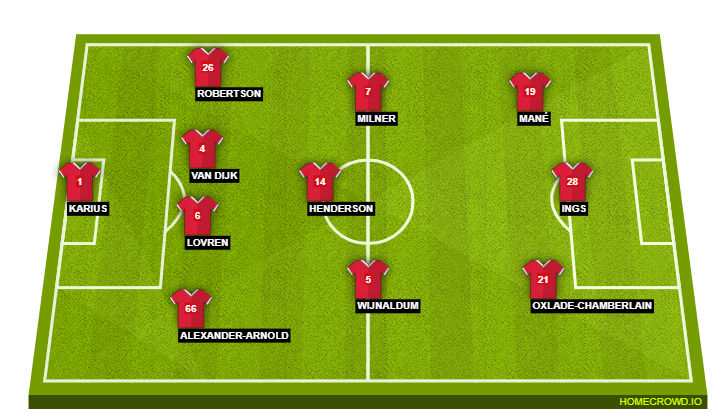 In midfield, James Milner, Jordan Henderson and Georginio Wijnaldum are expected to start, with Alex Oxlade-Chamberlain likely to take up Salah’s place on the right side of attack.

Klopp spoke at length about the Egyptian’s injury during his pre-match press conference, iterating that he will not take a chance with the Liverpool talisman, if he isn’t fully fit.

“You can imagine we have tried everything to make him available. [There are] still 24 hours to go pretty much, or 23 hours to go until we start. So let’s see what happens. I cannot make Mo available because it’s the derby, I would never do it. If he is a doubt, he will not be involved.”

Klopp also hinted towards another major selection on Saturday, with Danny Ings likely to make his first start for the Liverpool first-team. The Englishman should, thus, lead the line for the Reds, with Sadio Mane making up the numbers in attack, meaning Roberto Firmino is likely to be an impact substitute.

“Danny is in a good shape. I would not guarantee it but it doesn’t look too bad that he could start tomorrow.”