Barcelona will aim to re-establish their seven-point lead over Atletico Madrid, when they visit Estadio Gran Canaria to take on relegation threatened Las Palmas on Thursday. Ernesto Valverde does have a couple of roster problems on his hands, but has ample cover in his squad in their absence.

Jordi Alba is suspended for the game after picking up his fifth booking of the league campaign. In his absence, Lucas Digne should start as the left-back. The major concern surrounds the absence of Nelson Semedo, who sustained a hamstring injury in the win over Girona over the weekend.

With the Portuguese defender sidelined for up to six weeks, Valverde will have to bank on Aleix Vidal, whenever he needs to rest Sergi Roberto, who should start on Thursday. At the heart of defence, the Barcelona boss might choose to rest Gerard Pique, who is struggling with a persistent knee injury. 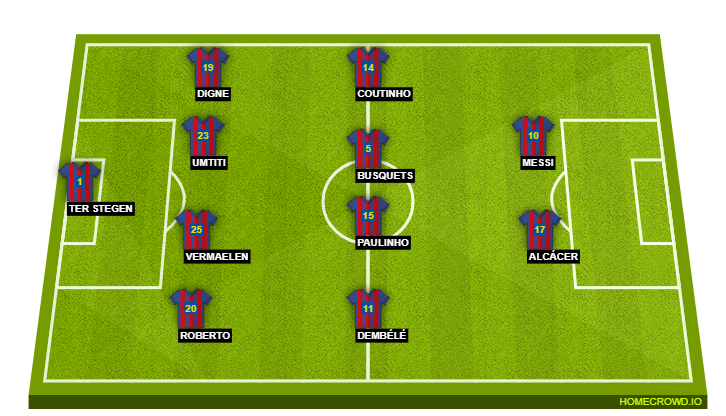 In his stead, Thomas Vermaelen is likely to start alongside Samuel Umtiti in the central defensive partnership. Valverde, though, has iterated in his pre-match press conference that there are now big concerns surrounding Pique, confirming that the veteran defender has trained this week.

“Piqué is fine and he trained yesterday. Against Girona we substituted him because he took a knock that was nothing to do with the previous injury.”

Up ahead in midfield, Ousmane Dembele could get another start after Valverde affirmed that the young Frenchman is “feeling good mentally and is training well”. But, Ivan Rakitic and Andres Iniesta are likely to start on the bench, with one eye on Barcelona’s crucial game against Atletco Madrid on the weekend.

Paulinho and Philippe Coutinho should take up the duo’s place, with Sergio Busquets the holding midfielder. The real bone of contention though, is whether Valverde will pick Luis Suarez, who is just one booking away from accruing a one-match ban.

The manager gave nothing away when asked about the same, but it is likely that Paco Alcacer will start alongside Lionel Messi upfront, with the Spaniard recovering from gastroenteritis. Suarez should, thus, be an option off the bench, if needed by Valverde.