Zinedine Zidane will be without four first-team players when Real Madrid visit Estadio Municipal de Butarque on Wednesday to take on Leganes.

Real Madrid will be aiming to leapfrog Valencia into third place on the La Liga table when they play their game in hand against Leganes at the Butarque on Wednesday. But, there are a few problems that Zinedine Zidane has on his hands, with the two creative powerhouses of his team on the treatment table.

Luka Modric has joined Toni Kroos (knee) on the sidelines after picking up a hip injury in training. The Real Madrid boss will also be without Marcelo (hamstring) and Jesus Vallejo (muscle injury). Zidane, meanwhile, chose to speak about Modric’s problem in his pre-match press conference, hoping that the Croat is not sidelined for a long time. 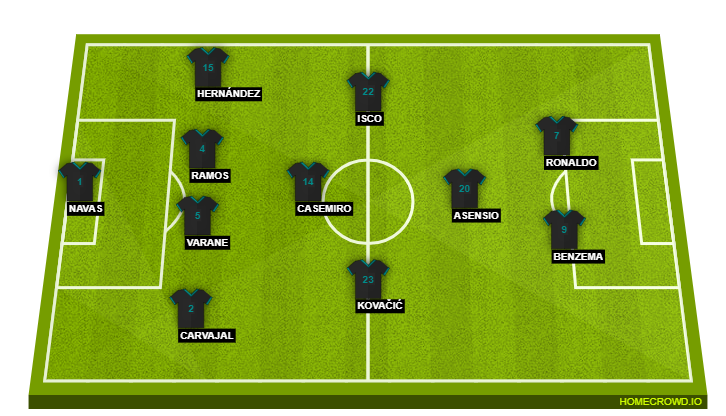 In the absence of Modric and Kroos, the creative burden is likely to fall on the shoulders of Isco, who should return to the starting lineup on the night, slotting into the midfield trio, with Mateo Kovacic and Casemiro expected to be his partners.

At the back, Raphael Varane should slot back into the heart of the Real Madrid defence alongside Sergio Ramos after being rested for the win over Real Betis last weekend. In the absence of Marcelo, Theo Hernandez should be the man deputising at left-back, with Dani Carvajal starting on the opposite flank.

Meanwhile, Zidane should revert to his preferred 4-3-1-2 formation, with Marco Asensio starting in the hole behind the strike partnership that should feature Cristiano Ronaldo and Karim Benzema, who should return to the starting eleven in place of Gareth Bale, with Zidane still managing the Welshman’s minutes.

“He [Bale] is trying to do his best. There’s a lot of talk about one player or another but the important thing is to realise that the team is the most important thing and for everyone to give their all.”

Bale should again be a factor from the bench for Real Madrid, as he was against PSG in the Champions League last week, with the other option for Zidane being Lucas Vazquez.