Ernesto Valverde has just one player on the treatment table as Barcelona prepare to visit the Ipurua to take on Eibar on Saturday.

Barcelona will look to end their recent mini run of winless results in La Liga when they travel to the Ipurua Municipal Stadium to face Eibar on Saturday. The match puts Ernesto Valverde in a conundrum as a win is imperative, although with his side set to visit Chelsea next week, he might rest a few stars.

The Barcelona boss though, has iterated in his pre-match press conference that he only has his eyes on Saturday’s game against Eibar for now while also adding that a week long rest – for the first time in 2018 – has helped his squad immensely.

“We are only thinking about the game in Ipurua. We know that it is an important match but following the draw against Getafe, the trip to Eibar is even more important. More than physically, it has been good mentally. It’s been good for the squad to rest mentally after quite a few weeks with Cup ties and the league every three days.” 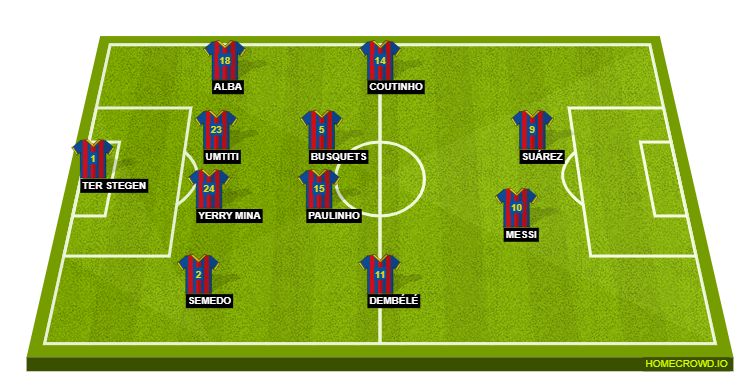 The admittedly long layoff since the last game has also done wonders to Barcelona’s injury situation, with just Thomas Vermaelen on the treatment table, as he continues his recovery from a hamstring injury.

The visitors can welcome back Gerard Pique from a short-term knee injury and Samuel Umtiti as well after he served a one-match suspension last weekend. Pique, though, is likely to be afforded some more rest in order to be in the best possible shape for the Chelsea game.

Yerry Mina is, thus, likely to start once more at the heart of the Barcelona defence alongside Umtiti, with Nelson Semedo and the tireless Jordi Alba flanking the duo. Behind the back-four, Marc-Andre ter Stegen should once again be the one to guard the Barcelona goal.

Up ahead in midfield, Andres Iniesta and Ivan Rakitic should be the ones rested with one eye on the European fixture. Philippe Coutinho is a certain starter, considering he is ineligible to feature in the Champions League for the remainder of the campaign, and should be on the left side of the midfield.

Making up the numbers, should be Sergio Busquets, Paulinho and Ousmane Dembele, who has shrugged off an illness to be available for the Eibar game. Upfront, Lionel Messi and Luis Suarez would be looking to end their recent league drought in front of goal, when they combine to be the strike partnership once again.