Ernesto Valverde has just one first-team player sidelined as Barcelona visit the RCDE Stadium to take on local rivals Espanyol on Sunday.

For a third week running, Barcelona and Espanyol will lock horns in a Catalonia derby as the two local rivals face off at the RCDE Stadium on Sunday. And as far as Ernesto Valverde is concerned, he has a lot to be optimistic and elated about.

The Barcelona boss has just one player remaining on the treatment table, with Thomas Vermaelen recovering from a hamstring injury. But, the Belgian defender’s absence does not pose much of a problem with the first-choice pairing of Gerard Pique and Samuel Umtiti, in addition to Yerry Mina, all available.

Pique and Umtiti are likely to start at the heart of the Barcelona defence, providing cover to Marc-Andre ter Stegen behind them, with the German shot stopper likely to replace Jasper Cillessen in goal. Flanking the duo, should be Nelson Semedo and Jordi Alba. 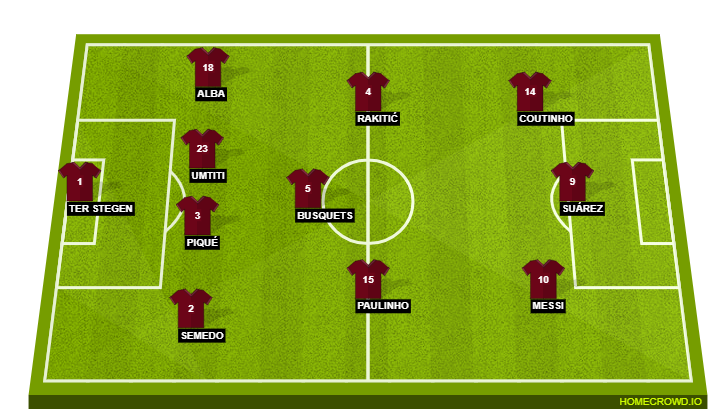 Up ahead in midfield, we might see Valverde hand a rest to captain Andres Iniesta, with the veteran midfielder playing every single game lately.

The Barcelona manager hinted towards the same in his pre-match press conference, while also providing a fitness update on Ousmane Dembele, who has returned to training after recovering from a hamstring injury.

“It is possible that Iniesta won’t start. As it is a derby it will be very intense. If we rest him it will be because he has played a lot and we have lots of players who need a rest. It is too early for Dembélé. We are going to be careful with him. We will bring him back slowly like we did the last time.”

With Iniesta likely to start on the bench, Brazilian midfielder Paulinho should return to the starting lineup, partnering Ivan Rakitic and Sergio Busquets in midfield. Paulinho’s compatriot, Philippe Coutinho is also expected to start after only making the bench in Barcelona’s midweek cup win over Valencia.

The Brazilian playmaker should line up alongside Lionel Messi and Luis Suarez in attack, with Paco Alcacer another option, should Valverde ponder resting the Uruguayan striker.