Arsene Wenger has just two first-team players on the sidelines as Arsenal get set to host Everton at the Emirates on Saturday.

Arsenal will be looking to quickly move on from the shock midweek defeat at the Swansea City when they welcome Everton to the Emirates on Saturday. The mood in the Gunners’ camp though, seems to be buoyant, following the arrival of Pierre-Emerick Aubameyang on deadline day.

But, while the attacking unit has become quite formidable, there are a few problems in defence for Arsene Wenger. The backline as well as goalkeeper Petr Cech have been highly error prone in recent weeks, although the Arsenal boss is unlikely to make any major changes to the defensive unit.

Wenger is unlikely to make any tactical change at the back either, and a back-four featuring Hector Bellerin, Laurent Koscielny, Shkodran Mustafi and Nacho Monreal is expected to start on Saturday.

Up ahead in midfield though, Wenger might opt for a pivot to stack numbers in attack, with Mohamed Elneny likely to be the man to make way. Granit Xhaka and Aaron Ramsey, thus, are expected to start in the middle, with Jack Wilshere still not fully fit, although the Arsenal manager was optimistic about the Englishman’s availability in his pre-match press conference. 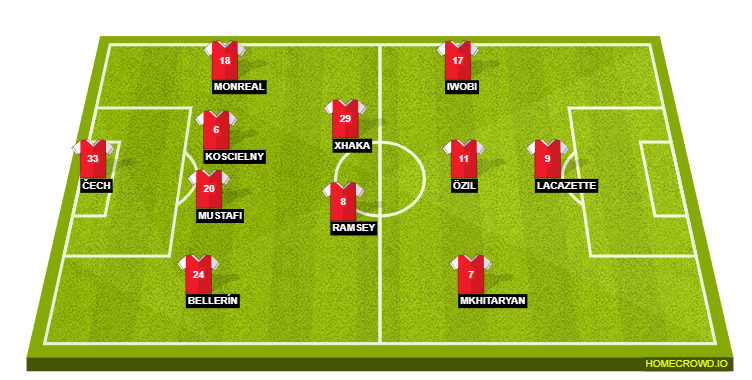 “We had Jack who was sick – I still have to assess him today. I hope he will be capable of being in the squad. He’s better. He’ll train with the team today and we’ll see how he feels.”

There aren’t a lot of pressing injury concerns in attack, with Danny Welbeck (hip) the only player on the sidelines. There are doubts surrounding the availability of January’s deadline day signing Pierre-Emerick Aubameyang, who is recovering from an illness and will be assessed ahead of the game.

But, fellow January arrival Henrikh Mkhitaryan is set to make his first start for Arsenal after appearing from the bench in the loss to Swansea, with Wenger confirming the same in the presser.

“Aubameyang was sick as well so we have to assess him today. Apart from that, Welbeck is not completely back from injury. He’s not ready. Certainly Mkhitaryan will start. That’s a possibility, yes. Aubameyang, I have to assess how well he feels.”

Alongside the Armenian schemer, Mesut Ozil, who signed a renewal with Arsenal this week, and Alex Iwobi should make the numbers in attack. Alexandre Lacazette is expected to be the lone striker upfront, with Aubameyang only likely to come off the bench, if he’s fit enough.