Jurgen Klopp is without just three first-team players as Liverpool travel to the John Smith’s Stadium to take on Huddersfield Town on Tuesday.

Liverpool will be looking to quickly move on from their disastrous FA Cup ouster over the weekend when they face Huddersfield Town at the John Smith’s Stadium on Tuesday. Before meeting his close friend David Wagner’s side though, Jurgen Klopp has some cause for optimism.

The Liverpool boss has just three players remaining on the treatment table, with Nathaniel Clyne (back), Adam Lallana (illness) and Ragnar Klavan (muscle injury) unavailable. Although the trio are only short-term absentees, none of them are posing any pressing concerns, with Klopp confirming the same in his pre-match press conference.

“I’m not sure in the moment, it’s really close. We have again a few knocks, different things, but nothing decided so far in this moment. It looks like all the players who were available for the last game are available again, but not 100 per cent.” 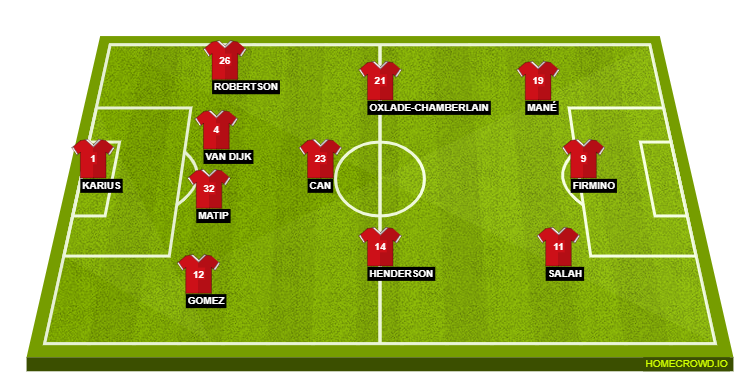 One major positive from the loss to West Bromwich Albion last Saturday was the return of Jordan Henderson to the matchday squad, and the Liverpool captain looks likely to make his first start in five weeks on Tuesday, likely taking Georginio Wijnaldum’s place in midfield.

Alongside Henderson in the midfield trio, Emre Can should continue his role as the holding midfielder, while Alex Oxlade-Chamberlain will be in a more advance role. Behind them, the central defensive partnership should again comprise of Joel Matip and Virgil van Dijk as Klopp looks for stability at the back.

The full-backs are likely to be rotated though, with Joe Gomez and Andrew Robertson expected to return to the lineup. Loris Karius, too, should be back after giving his place to Simon Mignolet for the cup defeat.

None of the first-choice front trio is likely to be rested on the night, with Liverpool desperately looking for a first win in three. Mohamed Salah, Sadio Mane and Roberto Firmino should, thus, start, although one person will definitely not be involved – Daniel Sturridge, who completed his loan move to West Brom on Monday.