Ernesto Valverde has picked Samuel Umtiti in the matchday squad as Barcelona prepare to face Real Betis at Estadio Benito Villamarin on Sunday.

Barcelona will look to recover quickly from their first loss of the season when they meet Real Betis at Estadio Villamarin on Sunday, hoping to consolidate their place atop the La Liga table. And, Ernesto Valverde has been buoyed by the return of one of the most important members of his squad.

Samuel Umtiti has recovered from a hamstring injury and is available for selection this weekend, having trained with the squad this week. The French defender has been named in the matchday squad for the visitors, as well as Gerard Deulofeu, who has completed his rehabilitation from injury as well.

But while the aforementioned duo are ready to return, Valverde is also missing the services of eight first-team players due to fitness problems. The likes of Paco Alcacer, Javier Mascherano, Andres Iniesta, Philippe Coutinho and Ousmane Dembele, who picked a fresh hamstring injury last weekend, are all on the treatment table. 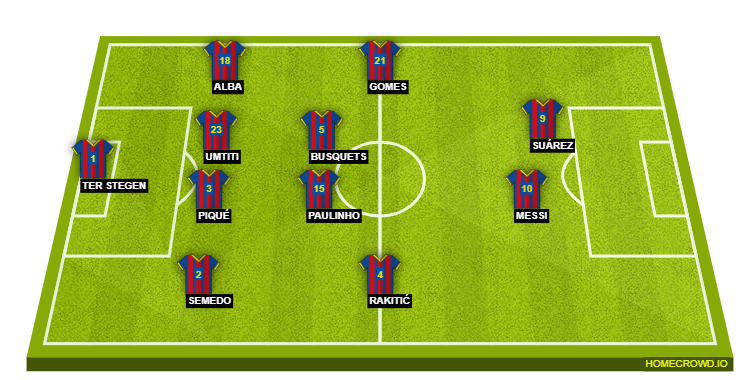 Rafinha is unavailable as well, having been given special leave of absence, while Denis Suarez and Yerry Mina missed out. Valverde spoke about the Colombian defender, in particular, in his pre-match press conference, iterating that he will be eased into the side as he adapts to a new team and style of play.

“Yerry Mina is now free to play after the transfer has been sorted out. I have spoken to him and although I have told him that there is a chance that he might be in the squad tomorrow, he still needs time to adapt to the way we play and that’s not something that is easily done.”

With Mina and Mascherano unavailable, Thomas Vermaelen is the only other option beyond Gerard Pique and Umtiti, who may return to the side straightaway. On either side of the central defensive duo, Nelson Semedo and Jordi Alba are expected to be the full-backs in front of Marc-Andre ter Stegen.

In midfield, with the likes of Dembele, Denis Suarez, Iniesta and Coutinho sidelined, Valverde has a restricted bunch of players to choose from, meaning Andre Gomes might get another chance to impress, alongside Ivan Rakitic, Paulinho and Sergio Busquets.

The strike partnership picks itself up, with Lionel Messi and Luis Suarez starting to become a strong two-pronged attacking duo. The right-back slot might be the only bone of contention, with Sergi Roberto the other option at Valverde’s disposal.