The U21 Euro group stage draw is set to be held on Thursday. In lieu of this event, UEFA have published their U21 all-time greatest XI, and it includes some big names from the Premier League, La Liga, Serie A and Bundesliga

Before they became household names and sporting icons, some of the biggest footballers in the world were making heads turn in the UEFA European Under-21 Championship. With the 2017 edition of the competition set to start in June, UEFA have released their  all-time XI.

Italian internationals makes up most of the team with four players, followed by Germany with three. Spain (2), England (1) and Serbia (1) are also represented in the XI

Arsenal midfielder Mesut Ozil is one of three players who are still first choice players for their clubs in a European top tier league. The Bayern Munich pair of center-back Mats Hummels and goalkeeper Manuel Neuer are the other two.

A surprising entry is out of favour Chelsea defender Branislav Ivanovic at left-back, with Blues legend Frank Lampard also part of the team. Big club icons Xavi, Raul and Francesco Totti are also part of the team, having had legendary careers at Barcelona, Real Madrid and AS Roma.

Totti of course continues to toil away for the Romans, even at the ripe age of forty. The other three Italians in the team are Juventus defender Georgio Chiellini, former AC Milan defender Alessandro Nesta and the evergreen regista Andrea Pirlo. 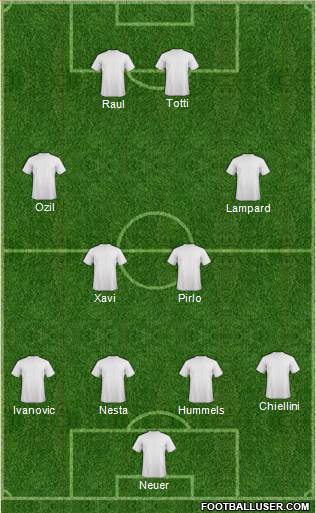