The UEFA Team of the Year voting is underway, and the European football organization took this opportunity to look back at the players who have made it to this ultimate XI the most times

The UEFA ultimate Team of the Year has been around since the dawn of the new millennium. European competition has been largely dominated by the two La Liga giants Barcelona and Real Madrid over the past few seasons, with one of the duo winning five of the last eight Champions League trophies.

This is reflected in the UEFA all-time XI, which features as many as nine footballers who have played for either Barcelona or Real Madrid. The Blaugrana dominate the XI with six players, followed by Los Blancos with three.

Bayern Munich Philipp Lahm is the only representative from the Bundesliga, while Liverpool legend Steven Gerrard is the only Premier League player in the side. Both of them spent their entire professional careers in Europe with the same club.

Pique won the trophy with Ronaldo as a teammate at United, but has since gone on to win it thrice with his boyhood club Barca. 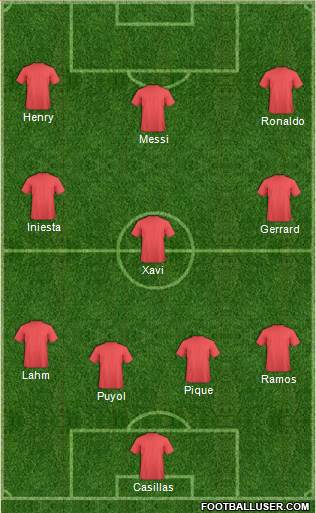