Arsenal have quite uncharacteristically already made their first signing of the summer, as former Borussia Monchengladbach star Granit Xhaka looks to lead a new and improved Arsenal midfield.

The Gunners had been linked with Borussia Monchengladbach captain Granit Xhaka since late last year, and they confirmed the signing last week. The Swiss midfielder reportedly cost Arsenal £30 million and is set to become one of the foundations of a new look Arsenal midfield following the departure of club legends like Mikel Arteta, Tomas Rosicky and Mathieu Flamini.

The Swiss midfielder has been inspirational for Borussia Monchengladbach this season, and has emerged as one of the best footballers in the Bundesliga at the tender age of just 23. Not only is Xhaka an adept passer and holder of the ball, his leadership skills have also come under high praise from pundits. His defensive work is also decent, but one major issue with Xhaka is his discipline as he is known to lose his cool and can be drawn into bad tackles.

The midfielder will have to establish himself in the current Arsenal midfield though, which boasts considerable talent despite the departure of the old guard. The likes of Jack Wilshere, Mohamed Elneny, Aaron Ramsey, Francis Coquelin and Santi Cazorla will all be vying for the two central midfield positions in the 4-2-3-1 system that Wenger likes to deploy.

However, the addition of the big money signing could definitely bring about some major changes in how Arsenal line up. The 23-year-old midfielder, who will very likely slot straight into the starting XI, is seen as the player who will emerge as the leader that the Gunners have so often lacked since the departure of the legendary Patrick Viera.

Here are three ways Arsenal could line up with Granit Xhaka in the starting XI. 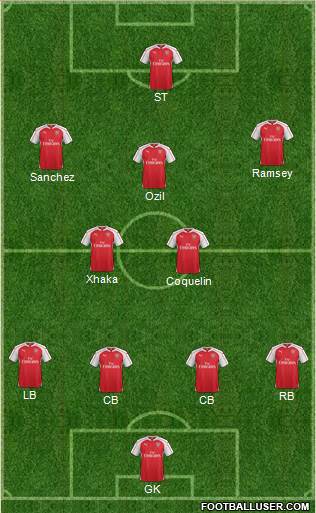 Wenger and Arsenal would most probably like to stick with the formation that helped them achieve a 2nd place finish this season. This would involve a familiar set-up of one lone striker supported by three attacking midfielders and a central midfield duo expected to hold the ball and contribute defensively.

Although the likes of Santi Cazorla, Jack Wilshere and Mohamed Elneny are top players, the standout star for Arsenal is central midfield has always been Francis Coquelin. The Frenchman has been a revelation the past couple of seasons and has shouldered the Gunners’ midfield responsibilities. He would definitely be first choice to play alongside Xhaka in a 4-2-3-1.

This would also surely mean that Aron Ramsey would move on from a central midfield position and start on the right wing. The Welshman has been used in this position before and the injury to Welbeck and relative inexperience of Joel Campbell and Alex Iwobi means Ramsey is probably the best man for the job. 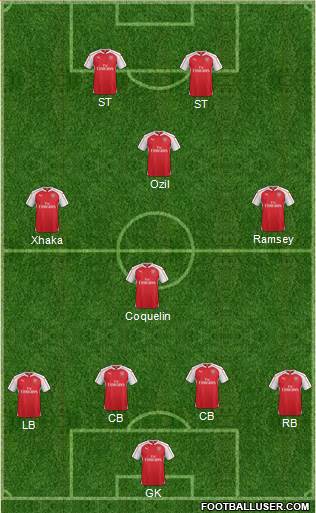 Given the midfield riches that Wenger has at his disposal, the 4-4-2 formation might be the best one for Arsenal to make full use of the talent in their ranks. A traditional 4-4-2 wouldn’t be reasonable given Mesut Ozil’s imperious form in the number 10 position. This formation would allow Xhaka to play in a more advanced and creative role too, as Coquelin sits at the base of the midfield for the Gunners.

The 4-4-2 could end up becoming more of a 4-2-2-2 if Xhaka drops back deeper. However, one thing that needs to be done to implement this structure is the acquisition of a new striker to partner Giroud up front. The Gunners’ Chilean star Alexis Sanchez could also be used in a role as secondary striker, playing off the centre-forward. 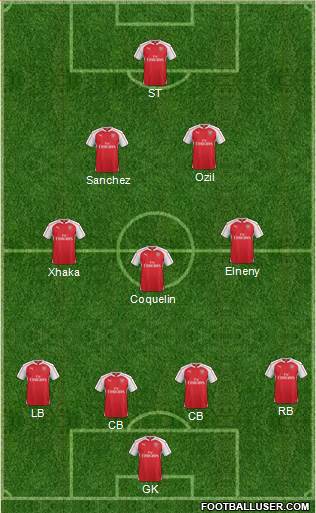 This formation would make the best use of Arsenal’s central midfield riches given the impressive showing by Mohamed Elneny towards the end of the season. Elneny, Xhaka and Coquelin would form the base of the midfield, behind the more attack minded Sanchez and Ozil in a formation similar to the 4-2-3-1, but with more emphasis on playing deep.

However, for all the formations above one needs to factor in the form and fitness of England’s Jack Wilshere and the experience of the wily Santi Cazorla, both of whom could easily hold down a starting position in midfield when fully fit and firing — a problem that Arsene Wenger would not mind having.