Colombian sensation James Rodriguez is finding things difficult at the Santiago Bernabeu under new manager Zinedine Zidane, and could be on the way to Manchester United in a big money transfer this summer.

James was one of the breakout stars of the 2014 FIFA World Cup, and it didn’t take long after that for Real Madrid to snap him up from AS Monaco for a whopping £58 million transfer fee. After a promising first season at the club, 2015-16 hasn’t been quite as good for the Colombian.

The attacking midfielder has struggled to fit into the 4-3-3 system that current manager Zinedine Zidane has implemented at Real. The Frenchman prefers a midfield trio of Toni Kroos, Luka Modric and Casemiro, with James becoming a regular on the bench in recent weeks. His off-field behaviour has also come under immense scrutiny in Spain and the combination of these factors has led to a disillusioned James looking to take his services elsewhere.

For their part, Real Madrid would be willing to sell him on for a big price, using the funds to splurge in this summer transfer window. The La Liga giants face the prospect of a transfer ban by FIFA, which will be decided after the 2016 summer transfer market closes, and so would be keen to make a number of signings and get rid of players who are not part of their long term plans — a category James Rodriguez could fall into.

The 24-year-old is set to seek greener pastures in the summer and has been linked to a number of the top European clubs. The Premier League’s fallen giants Manchester United have been one of the clubs widely linked to the player and they received a huge boost in the chase recently as James has privately suggested that he would prefer a move to Old Trafford, according to ESPN.

James is among the best attacking midfielders in Europe, possessing all the abilities to thrive in an advanced midfield role. Manchester United currently do not have a world class attacking midfielder, with the Spanish duo of Ander Herrera and Juan Mata failing to live up to expectations. The club have recently resorted to playing Wayne Rooney in the number 10 position, with the Englishman putting in a good performance in their final league game against Bournemouth.

However, Rooney is not a long-term solution and Manchester United need a different level of pace and inventiveness if they are to get back to winning ways. In this regard, James could fit in perfectly with the likes of Anthony Martial and Marcus Rashford and would be the ideal summer acquisition to resurrect the Red Devils’ attack.

Here are three formations Man United could play with James Rodriguez in the team:

The new number 10 at Old Trafford 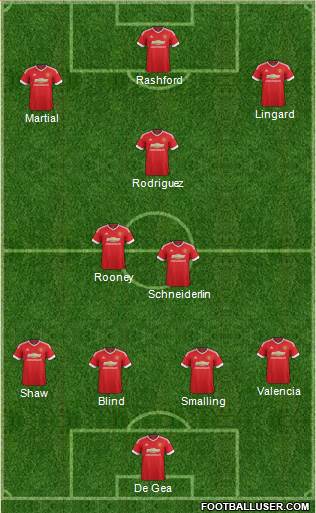 James could comfortably fit into the current formation at Manchester United and take up his natural attacking midfield position just behind the striker. This would oust Juan Mata from the team, while Wayne Rooney would take a step back into central midfield.

It would be the perfect set-up for the Colombian to shine, as he would be an integral conduit of the attacking play and could also help himself to goals given his shooting ability from outside the box.

Two strikers and a three-man midfield 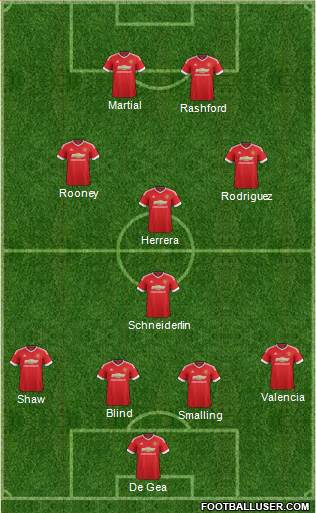 The arrival of the Colombian sensation could prompt an innovative tactical change for Manchester United to get the most out of their attacking midfielders. With Frenchman Morgan Schneiderlin deployed in his most effective role as a defensive guard, highly rated Spaniard Ander Herrera could join up with Wayne Rooney and James to form a creative trio that would feed their two young strikers, Anthony Martial and Marcus Rashford.

This formation would also allow the likes of Herrera and Mata to prove their first team midfield credentials. 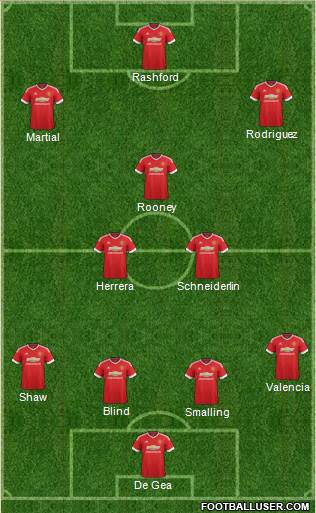 Manchester United academy product Jesse Lingard has had a breakthrough season with Manchester United, most of which he spent as the preferred man in the right-wing position. While Lingard is a good footballer, the two are miles apart in terms of ability and James would also be a more logical choice for the position since he is naturally left footed.

In this formation James would oust Lingard from the first team in a straight swap. The Englishman does provide United with one of their own in the attack, but at the cost of the world class attacking quality that the Red Devils so desperately need.