After an impressive victory in the first leg of their Champions League semi-final tie, Atletico Madrid travel to Germany to try and maintain their 1-0 advantage against Pep Guardiola’s Bayern Munich.

Saul Niguez scored a breathtaking solo goal to give Atletico the lead against German giants Bayern Munich in the first leg of their UEFA Champions League semi-final clash. The wounded Bavarians will be hoping to get their own back in an arena that they have turned into a fortress in the Champions League.

Bayern Munich haven’t lost at the Allianz Arena since the 2014 semi-final, when they were beaten by Atletico’s cross town rivals Real Madrid. Since then they have tamed every visitor including Barcelona last year at home and most recently Juventus, who conceded four goals after taking a 2-0 lead to crash out in the Round of 16 stage this season.

Atletico are on a hot streak too though, having won their last seven matches and gone 602 minutes without conceding a goal. It promises to be a highly competitive affair on Wednesday.

The Bavarians will be missing the services of Holger Badstuber due to an ankle injury. However, the central defensive pairing of Javi Martinez and Jerome Boateng are more than capable of holding their own and will be flanked by the experienced Philipp Lahm and dynamic Austrian left-back David Alaba.

The central midfield is like to feature Xabi Alonso and Arturo Vidal; while the experienced Spaniard will look to dictate play with his passing ability, the Chilean box-to-box midfielder will look to dominate proceedings in midfield and transform possession into attack.

Douglas Costa has been in great form since arriving from Ukrainian giants Shakhtar Donetsk last summer, and the Brazilian will hope to bombard the Atletico defence from the flanks. Pep Guardiola will probably play Thomas Muller in the second leg and the German forward will be deployed behind striker Robert Lewandowski to give Bayern more natural goalscorers in attack. On the right wing, Bayern miss the experience of injured Dutch winger Arjen Robben, but will look to their other veteran winger in Franck Ribery to show them the way. 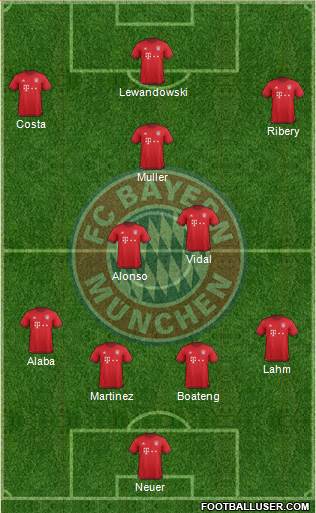 Atletico have the luxury of a fit and firing squad to choose from and Diego Simeone will be intent on seeing his regular starters put in yet another clinical performance. The line-up will be similar to the one that started in the first leg. Goalkeeper Jan Oblak played a crucial role in that game and will start once again at the Allianz Arena behind the resolute defensive back-line of Juanfran, Jose Gimenez, Diego Godin and Filipe Luis. Saul, Gabi, Renato Augusto and Koke form the midfield and this group of eight players are the key to Simeone’s tactical success.

The back four and midfield form compact banks of four while defending that have been difficult to pierce for the opposition. The scoring onus will be on the in-form duo of Fernando Torres and Antoine Griezmann. The Frenchman is an aerial threat as well as a shrewd goal poacher, while Torres has recently started reminding everyone just why he was once considered the heartbeat of Liverpool 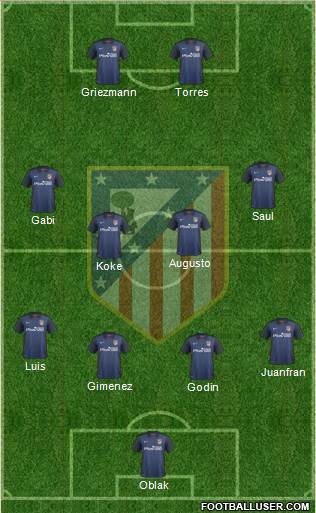 
The Frenchman scored the brace that knocked out defending champions Barcelona and is in superb form ahead of the key clash in Germany. In their last game against Rayo Vallecano in La Liga, Griezmann scored the decisive goal seconds after coming off the bench.

All eyes will be on the Frenchman as he looks to outshine the much acclaimed Bayern duo of Lewandowski and Muller.

The older Atletico fans will remember the heartbreak of their 1974 European Cup final. Los Rojiblancos and Bayern played out a 1-1 draw initially, but Atletico were squashed 4-0 in the subsequent replay.