The forward was a crucial first team player for Barca under Pep Guardiola and has predicted the starting XI for Manchester City next season based on his understanding of Guardiola’s tactics and managerial style.

Legendary Arsenal striker is as excited as everyone else about Pep Guardiola’s arrival to the Premier League, although it will be at rival club Manchester City. The current Sky Sports pundit recently spoke about the changes that he thought Guardiola would make  upon his arrival at the Etihad Stadium.

“He will bring competition because at every single position at every club you have two guys that can start, and that’s just the way it is,” said Henry on Saturday Night Football.

“We are obviously just speculating, but he is not scared to change things. He will demand a lot from his players, from the kit man, from the groundsman, from the people who make coffee at the training ground. Everything has to be perfect – intensity, work ethic and possession.” 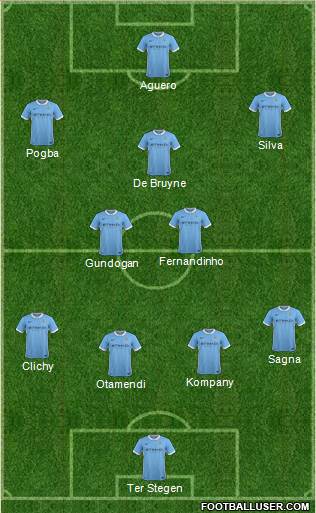 Ter Stegen instead of Hart, Pogba for Sterling, Gundogan for Toure

Thierry Henry has suggested three basic changes to the current Manchester City starting XI. The most glaring swap is the goalkeeper, who is second choice at Barcelona. Joe Hart is considered one of the best keepers in the league and has an admirable blend of skill and experience. The England number one has been the core of Manchester City’s success over the past years, and it would be difficult to imagine City without Hart.

Both Ter Stegen and midfielder Ilkay Gundogan have been linked with Manchester City in the past, while Juventus midfielder Paul Pogba is currently one of the most coveted players in the world. It remains to be seen whether Guardiola’s squad overhaul will be as simple as Henry predicts.