It was a long-time coming, but Mumbai City FC have finally secured a place in the Indian Super League play-offs, and have done it in style as well with a finish at the top of the league table. After enduring two disappointing campaigns previously with a 7th and 8th placed finish respectively, the Mumbaikaars have come into their own in this third edition taking the league by a storm with some irresistible football. And At the forefront of all the excitement has been the form and contribution of Uruguayan legend and marquee player, Diego Forlan. The former Atletico Madrid and Manchester United striker has added some much needed experience in the forward line to compliment the likes of Sony Norde, Brito Alves and Sunil Chhetri in attack for Mumbai.

On Saturday however, Mumbai failed to convert their chances against a resilient Delhi Dynamos side as the duo settled for a point apiece which also ensured that they will not face each other in the semi-finals. Delhi, who have booked their tickets into the play-offs for the second consecutive year, made eight changes coming into the game even resting marquee player Florent Malouda. No such pleasantries in the Mumbai camp though as Alexandre Guimaraes named a near full-strength line-up in-order to complete a strong finish to their league proceedings and were only devoid of Sunil Chhetri in the line-up with 20-year-old Udanta Singh stepping up to make his ISL debut.

Mumbai marquee Diego Forlan was the first to test the rival goalkeeper with a fierce shot after the Uruguayan striker had controlled a perfect cross from the other end by Brazilian midfielder Cafu. Forlan’s shot, however, was blocked by Delhi goalkeeper Toni Doblas. Doblas also had to stay alert towards the closing stages of the opening half when Cafu played a ball for Sehnaj Singh on the right but his shot was palmed away for a corner.  In the second session, both teams went close and the match could have gone either way. Interestingly, both teams hit the post in successive minutes. In the 72nd minute, Cafu picked up a ball just outside the box and took a snap shot on goal which rattled the post with goalkeeper Doblas looking helplessly. A minute later, Bruno Pelissari was unlucky at the other end for Delhi Dynamos as his shot from outside the box took a deflection and struck the post.

The game didn’t have the edge and end-to-end football that has marked this campaign throughout and as far as the final result is concerned, Mumbai will be the more disappointed side given their domination as they failed to make their numerous chances count. The Ranbir Kapoor-owned franchise fired in nine shots on goal as opposed to Delhi who managed only five that didn’t really trouble Amrinder Singh in goal. And a significant credit for that goes to the back-line that maintained a solid resistance and managed to shut out any threat posed by the Dynamos.

Things have looked bright for Mumbai this term but the Maharashtrian side will do themselves good not to get carried away by their league placing knowing that in the past editions the side finishing top at the business end has never gone on to lift the ISL trophy in the end. Guimaraes will be determined to change that come next Saturday.

With three spots already decided, Kerala Blasters and Northeast United are the only suitors eligible for the remaining play-off spot and are set to battle it out till the very end in the final league game at the Jawaharlal Nehru Stadium on Sunday.

A draw will seal it for the Blasters but Steve Coppell insists his side are in it for full monty. He was quoted as saying,” We just play. I don’t know how to play for a draw. We play to try and win the game. As the game develops, obviously people make decisions. The coaches will try and change (approach). As the game develops, the consequences will become apparent but certainly at the start, we are going in to win, trying to win. That’s the only way we can approach.” It is a home encounter for Kerala and given their marvelous run of form at Kochi the onus is on them to join Mumbai, Atletico and Delhi in the play-offs. And lining up against a side with a very sketchy away record, you’ll be forgiven for already placing your bets in favour of Kerala’s progress.

That said, this campaign has often challenged conventional wisdom all along shattering records and springing up surprises and hence given what’s at stake on Sunday Coppell cannot afford any slack from his players. There is also the small matter of Kochi being chosen as the venue to host the final of the Indian Super League meaning there is just that much more motivation for the boys in yellow to make it count against Northeast United.

CK Vineeth has been Kerala’s star performer this season. The midfielder has four goals and an assist to his credit and has been instrumental in pulling the strings from the centre of the park and is expected to be at the forefront of all the goalmouth action for the Blasters. Antonio German, Kervens Belfort and Rafi are other key figures up front that have aided Vineeth with the goals and will come in handy in breaking down Northeast’s resilience on the night. Apart from being a potent attacking force, the Blasters are also equally tough to break down defensively with the partnership of Cedric Hengbart and Aaron Hughes at the back coming up good for the 2014 finalists.

Coppell is set to miss out on the services of Mehtab Hossain, who is ruled out due to a suspension, going into the crunch clash on Sunday and the Englishman will hope for a positive performance from his replacement to ensure his absence is not felt in midfield. Mahamat is likely to take his place in the line-up and could feature alongside N’Doye and Ishfaq Ahmed in the centre of the park. 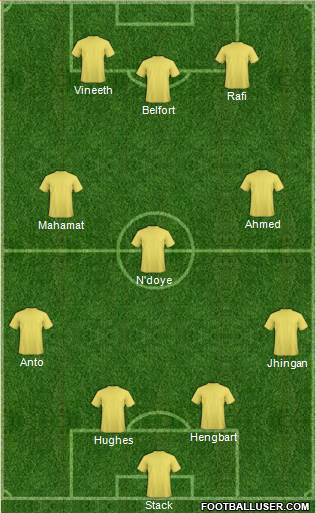 After a promising start to the campaign the Highlanders seemed to have lost their way and in recent weeks have clawed their way back in contention for a play-off spot. However a massive hurdle lies in between them and a cherished dream of a maiden play-off qualification in the form of the Kerala Blasters. That said, Northeast United will take heart from their encounter against Blasters early on in the campaign in a 1-0 victory sealed by a late Katsumi Yusa strike.  Nelo Vingada has called the Sunday showdown a ‘World Cup Final’, and understandably so. The odds maybe stacked against his side but the Highlanders are on a 4-game unbeaten streak and coming at the back of a 2-1 victory over an in-form Delhi side have all it takes to upstage the Blasters in their own backyard.

Subrata Paul and Gustavo Lazzaretti will definitely miss out while Nicolas Velez, who suffered an injury against Delhi Dynamos, is in contention for a spot. Kerala-born TP Rehenesh will start in goal for NorthEast while Mailson Alves is expected to marshall the defense. But it will be Emiliano Alfaro, Romaric and Robert Cullen who will be tasked with breaching the Kerala defense which is bolstered by the partnership between Aaron Hughes and Cedric Hengbart.

NorthEast United FC players practise before the start of the match 11 of the Indian Super League (ISL) season 3 between FC Pune City and NorthEast United FC held at the Balewadi Stadium in Pune, India on the 12th October 2016.
Photo by Vipin Pawar / ISL/ SPORTZPICS

Speaking of Northeast’s chances in the pre-match conference Vingada said,”“I am sure tomorrow we will have a fantastic atmosphere. Football is not only performance, it’s about results. Tomorrow we will be here for one thing: result, and as you know, performance is forgotten and result remains forever. I hope we can have a great game. Kerala has an advantage with 50,000 to 55,000 fans supporting them but that will not be enough. Who can win the game are the players inside the field. I know it will be hard for us because we must win but we are here to win.” It’ll be interesting to see how Vingada lines up his side as he looks to steal a march on the Blasters and secure what would be a famous progress through to their first ever Indian Super League play-offs. 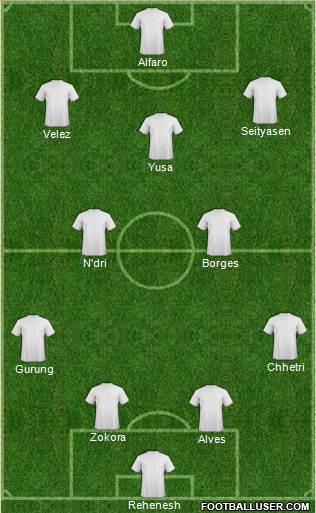 It promises to be a cracker of an atmosphere and in a game with so much at stake you can expect both the teams to put their best foot forward and while the points table and Kerala’s home record pit them as favourites, Northeast have what it takes to cause an ‘upset’ and will stage a valiant fight on the night. There is little to differentiate between the two teams in terms of attacking quality and defensive prowess and hence a draw looks like the most likely result from what will prove to be a feisty encounter.