You are here: Home » india » Indian Super League : Forlan hat-trick inspires Mumbai City to 5-0 thrashing of Blasters; Chennai and Atletico set to battle it out for Top 4 spot
Football News 24/7

Mumbai City kept up their stellar run of form and aided by a Diego Forlan hat-trick displaced Delhi Dynamos at the top of the ISL table. After Pune pulled off a thrilling 4-3 win against the table toppers on Friday, the onus was on Mumbai to seize the initiative in their home tie against the Blasters and boy, did they do it. Uruguayan legend Forlan has been quietly going about his business in the league for Mumbai. However with the hat-trick on Saturday the former Atletico Madrid and Manchester United star duly stamped his class and authority and it couldn’t have come at a better time for Alexandre Guimaraes’ side.

As for Kerala Blasters, it was a case of one step forward and two steps back after they followed up their buoyant 3-1 victory at home over South Indian rivals Chennai last week with a demoralizing capitulation against Mumbai on Saturday. CK Vineeth appeared to be the only bright spark on the evening for the men in yellow as they continued their struggle to maintain consistency. There was no sign of the defensive resilience that highlighted this Kerala side as Mumbai completely exposed all their frailties at the back with a dominant display.

Forlan opened the scoring in just the 5th minute when he picked up a beautiful pass from midfield and slotted it past Graham Stack in goal. The Mumbaikaars were rewarded for their early pressure in the game as they fired off the blocks faster than Steve Coppell’s side did. It was just the third goal in the campaign for the Uruguayan however the confidence from that first strike seemed to inject the forward with new found confidence as he took more shots on Stack’s goal before he fired in a trademark free-kick in the 14th minute to double Mumbai’s advantage.

Forlan effectively sealed the game in the 63rd minute when he completed a scrappy move with a matured finish to score the first hat-trick of the third installment of the Indian Super League. From there on it was a night to remember for the Mumbai City fans as their side completed one of the more clinical performances this season with two more goals to compile the misery on Coppell’s Blasters. Cafu scored the 4th after unleashing an absolute pile driver from the edge of the box that left himself in disbelief. Fan favourite and captain Lucian Goian then scored the 5th and final goal vanquish any little fight left in Kerala as they marched their way to the top of the table.

The night belonged to Forlan, however Guimaraes will look back on an incredible team-display from the Ranbir Kapoor owned franchise as they continued their pursuit towards an elusive spot in the knockout stages of the Indian Super League. A win in their next game will effectively seal their progress through to the semi-finals for the first time ever. Good times ahead for the Mumbaikaars.

Chennaiyin FC set to battle it out against Atletico De Kolkata

The two sides have been on the receiving end of some demoralizing defeats off-late and come Sunday will be on the quest to seal semi-final berth as we approach the business end of the campaign.

At this stage of the season last time around, Chennai were rooted to the bottom of the ISL table and looked set to bow out of the competition falling short of the semi-final places. However a remarkable run that saw them win four games on the bounce ensured they took the last available spot to eventually go on and win the competition. This time around, the odds are a lot more in favour and Marco Materazzi will urge his men to wage a similar fight to the death for the knockout spots.

The men in Blue recovered from their loss in the South Indian derby with a victory over Pune City FC at home and with a win over Atletico de Kolkata on Sunday, the Super Machans can occupy the 4th spot at the expense of the Blasters who suffered a mauling at the hands of Mumbai City FC. However Chennai haven’t had it easy against Atletico having never managed a league victory over the team from Kolkata. Their only success came in the semi-finals last year enroute their successful title-winning journey.

Chennaiyin FC warm up before the start of the match 21 of the Indian Super League (ISL) season 3 between FC Pune City and Chennaiyin FC held at the Balewadi Stadium in Pune, India on the 23rd October 2016. Photo Courtesy : Vipin Pawar / ISL / SPORTZPICS

Chennai have shipped a lot of goals on their travels but look surprisingly steady at home.  They have kept three clean sheets at the Marina Arena, the most by any home team and their defence has been rock steady, conceding just four goals in five matches. However, that back-line will be afforded it’s true test of character once Iain Hume and Helder Postiga come calling on Sunday. Another key factor in their return to winning ways has been the return of Hans Mulder and the rise of a revitalized Raphael Augusto.

Materazzi instilled a more a direct attacking style of play that seemed to work to his side’s advantage against Pune. For much of this campaign, we have seen Chennai taking a measured approach in attack laying more emphasis on defensive stability. However with Manuele Blasi taking a deep role, Materazzi has encouraged the likes of Raphael Augusto to venture forward with more freedom and it has also helped bring out the best out of the creative Mulder. The Italian will hope that the change in approach and a more fluid attack in the form of Davide Succi and Jeje Lalpekhlua will work to his side’s advantage on Sunday night. 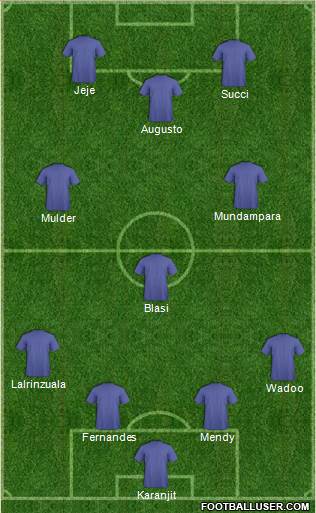 The primary problem with Atletico De Kolkata this campaign has been their attack. While they have been reasonably solid at the back, the struggles in front of goal seem to continue. Iain Hume has been picking up some goal-scoring form off-late but Helder Postiga’s worries in front of goal seem to continue. The former has finally begun to get into the thick of scoring action having scored in each one of his last three outings. Molina will bank on the services of the record goal scorer in the ISL to come up with the goods to shut out Chennai in a must-win encounter for both sides.

A profligate attack compounded by a lack of creativity and drive going forward in addition to an aging squad has often left a lot to be desired off the former champions this campaign. Things haven’t exactly gone to plan but that doesn’t diminish Kolkata’s chances of qualification by any stretch of imagination given how unpredictably bizarre the league has progressed this campaign. As many as six out of the eight participating franchises have occupied the top spot at some stage of the season.

There are little changes expected from Molina going into this big tie against Chennai as he is expected to keep faith with most of the players, especially marquee signing Postiga, much like he has all season. Whether the players repay his faith in them is there to be seen but nothing less than a win will do for Kolkata as they bid to qualify for the knockouts for a third consecutive year. As it stands, Atletico’s chances of lifting the ISL trophy this time around, given the numerous issues plaguing them, look slim but knowing what their opponents on Sunday fashioned when they were written off last year, they can certainly keep their heads high and continue fighting. 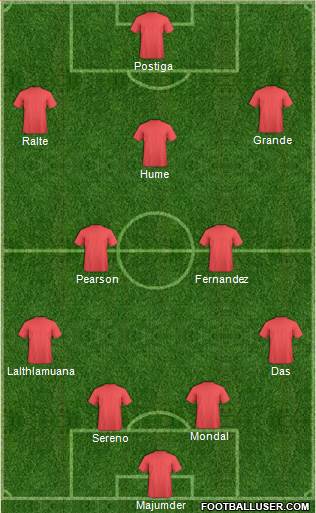 Chennai looked effervescently good in attack in the new 4-1-2-3 system that Materazzi deployed against Pune City FC in their 2-0 win at home. They are expected to continue with the similar system and with the pedigree of players they house in their line-up to aid them in their attack-minded endeavours going forward, it’s hard to not see them nick this one over Kolkata. However if the 2014 champions can admonish their demons in front of goal, we could be looking at a very different kind of game at the Marina Arena.