Northeast United FC return to top of the ISL table

Northeast United returned to the top of the table after edging Pune away at the Shiv Chhatrapati Sports Complex Stadium on Wednesday courtesy of a 79th minute Emiliano Alfaro winner. It was an open and well-fought encounter in the Indian Super League on a night that eventually ended with both teams left with ten men on the pitch with Nirmal Chhetri and Eduardo Ferreira receiving the marching orders.

Northeast were keen to make amends for their loss in the previous game against Mumbai City FC when Diego Forlan’s penalty ended their unbeaten start to the season. However having returned to winning ways against Pune City, the Highlanders will be keen to maintain the level of intensity and aim for the knock-out places.It was Northeast United who called the shots early in the game but it was Pune who registered the first attempt on goal when Jonathan Lucca sent in a free-kick from 30-yards away that did little to trouble the Northeast United keeper.

The match turned on its head in the 36th minute when NorthEast United defender Nirmal Chhetri was shown a straight red card for a desperate lunge on Anibal Zurdo. The sending off pegged NorthEast United back but the visitors did well to hold fort at the change of ends despite repeated attacks from Lucca and Mohamed Sissoko of Pune City. Pune, having the numerical advantage in the second session, tried to attack in numbers but NorthEast were defending well, allowing very little space for their rivals. The match then took yet another dramatic turn in the 72nd minute when Pune City’s Eduardo Ferreira was adjudged to have fouled Romaric and the referee sent him off as it was his second booking of the match.

NorthEast United were now back in control of the match and were rewarded in the 79th minute. Velez started it all with a fine run on the right and relayed the ball to Alfaro. The Uruguayan striker then passed the ball on the left to Yusa, whose shot from inside the box took a deflection and fell nicely for Alfaro again who put it across a diving Pune goalkeeper Edel Bete. Despite the loss the Punekars remain only a point away from the knock-out spots and coach Antonio Lopes Habas will be keen to enforce more consistency and initiate a winning run that could well give the top sides a run for their money.

Ten months ago, Chennaiyin FC and FC Goa contested in an incredible Indian Super League finale at the end of which the Super Machans sensationally escaped the jaws of defeat and took home the title. A lot has changed since then with early season form indicating both the sides could be engaged in a battle for the silver-spoon this time around. It’ll be interesting to see which one of the win-less duo will emerge with their first victory of the 2016 edition of the ISL.

It’s been an underwhelming start to the season but their exploits last season has shown that their early season run doesn’t matter if they can finish the league phase of the campaign well. Chennai were rooted to the bottom of the ISL table last season midway through the campaign before the Materazzi-led unit fought their way back with a 4-match winning streak to just sneak into the knockout places at the expense of Northeast United.

However this season they already look like they miss the firepower of Stiven Mendoza and the midfield partnership of Elano and Bruno Pellisari. Keeping their options up-front in mind Materazzi may opt to do away with Duwayne Kerr in goal to afford to option of fielding an overseas player like Davide Succi in attack alongside Jeje Lalpekhlua. Karanjit Singh, who’s plied his trade at Chennai for the last two seasons could deputize for the Jamaican international in goal against Goa.

Chennai’s fixtures with Goa have never been short of goals which indicates an interesting evening on offer especially keeping in mind the acrimonious events that transpired during the Super Machan’s dramatic 3-2 win over the Gaurs in the final. A change in personnel could also be expected in defence with Nallapan Mohanraj doing little to help in case with a poor performance at left-back in the absence of first-choice Dhanachandra Singh. With the latter still yet to recover from injury, Harmanjot Khabra, who’s been training at left-back recently, could prove to be a surprise starter for the Abhishek Bachchan owned franchise.

Thoi Singh will start in the middle of the park, returning from an ankle injury and taking Baljit Sahni’s place, with Raphael Augusto too under the scanner for a less than impressive start to the ISL season this time around, unlike his last stint. Maurizio Peluso remains suspended after a suspension from Italy carried over to the subcontinent’s most popular football league. He will be serving the third of his three-match ban. 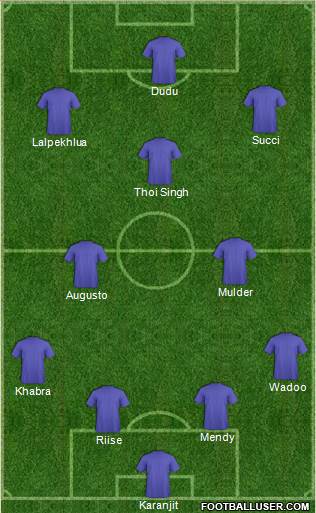 Despite generating some positives from their opening loss to Northeast United, FC Goa failed to respond to coach Zico’s rallying cry demanding more intensity from his team ahead of their clash against Pune as they succumbed to  Antonio Lopes Habas’ side 2-1 on Saturday. The Gaurs are the only team yet to open their accounts for the season and that is something the Brazilian coach can use to inject fire into his team if he is to harbour ambitions for his side to take the title this time around.

Gregory Arnolin and Robin Singh will be fit enough to grace the bench for the Gaurs, while Romeo Fernandes who put in a good, but wasteful, shift against FC Pune City, should start the tie. He and Mandar Rao Desai will trouble the opposition with their trickery and pace double-act. Rafael Coelho, who displayed extreme profligacy throughout the last tie for the Goan team, will be expected to start the team’s efforts to snatch three points alongside compatriot Reinaldo Oliveira.

Midfield will see Joffre and Trindade, two bright sparks for the team in their losing streak so far, retain their places in the starting eleven. Lucio and Rafael Dumas will start in central defense, though Zico will demand a lot more from his Brazilian marquee, considering the poor form he’s shown so far in the ISL, being directly responsible for atleast two of the three goals that the Goans have conceded. A lot has to change for Goa over the course of the next few weeks if they are to return back to winning ways and potentially challenge for honours this season. 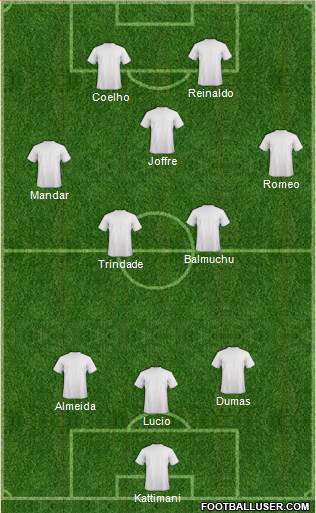 Neither of the sides have managed to forge a good start to the season and need to bring out a lot better fight and desire if they are to emulate their exploits from last year. With negatives outweighing the positives on both parties, it’s hard to split between the two sides at the moment and it’s highly likely they’ll play out a rather exciting draw at the Jawaharlal Nehru  Stadium at Chennai on Tuesday.