Didier Deschamps has picked his final 23-man squad for the FIFA World Cup 2018. But, can France achieve the pinnacle in world football? We analyse.

One of the original World Cup nations, France have been a force to be reckoned with, in Europe as well as world football. A nation that has historically produced some of the best talents to ever play the game, Les Bleus haven’t often justified their status in the game as one of its powerhouses.

The final World Cup winners of the 20th century, the 1998 triumph is the only time France laid their hands on the Jules Rimet trophy. Other than the win, the European nation were runners-up once, losing the 2006 final to Italy in a match that infamously saw Zinedine Zidane end his career with a headbutt on Marco Materazzi.

Qualification to the 2018 edition was largely straightforward as Didier Deschamps’s men topped Group A in Round One of the European Qualifiers, losing just once, although a draw against Luxembourg saw France slump over the line en route to securing a place in the Finals.

Last time out, Les Bleus improved massively on their showing in the 2010 edition, reaching the quarter-finals before they were ousted by eventual champions Germany. As France look to win the World Cup once again, The Hard Tackle takes a look at the squad that Didier Deschamps has picked and analyses whether they have what it takes to lift the Jules Rimet Trophy once again.

Drawn in Group C alongside Australia, Peru and Denmark, France seem to have a pretty straightforward time on their hands, with none of their opponents ideally posing a great deal of threat on the world stage.

Les Bleus will begin their World Cup campaign against Australia on June 16, before going on to face some South American flair in the form of Peru. Didier Deschamps’s men will then end their group stage assignment against Denmark, hoping to have wrapped up top spot by then.

Here’s what you’ve all been waiting for: our 23-man squad for the 2018 @FIFAWorldCup! 👀💪🇫🇷 #FiersdetreBleus pic.twitter.com/QEuCyMnblb

Didier Deschamps named his 23-man squad for the World Cup on May 17, and it had some surprise exclusions as well as those that were unlucky due to late injuries suffered during the club season. Here are the players that have made the cut:

Hugo Lloris will lead the side for the second World Cup in a row and will be the first-choice goalkeeper, bar any injury. There were, however, a few players who had to be left out of the squad due to the injuries that they picked up this month, those unfortunate ones most notably being Laurent Koscielny and Dimitri Payet.

While Koscielny was unlikely to have been a first-choice centre-back for France, Payet would have undoubtedly played a key role, having featured prominently under Deschamps and led Marseille all the way to the final of the UEFA Europa League this season.

Meanwhile, there are a few who were fit but will feel hard done by due to their omission from the squad. At the back, Benjamin Pavard’s rise means that Cristophe Jallet and Sebastian Corchia narrowly missed out, while Aymeric Laporte would be wondering what more he could have done after missing the ticket to Russia.

Likewise, Kingsley Coman, who was phenomenal for Bayern Munich this season, was only good enough for the stand-by list and could be called up if a player has to drop out. Anthony Martial, who fell down the pecking order at Manchester United, will also give Coman company, as will Alexandre Lacazette.

But, the biggest absentee from the squad is Adrien Rabiot, who was perhaps so shocked by his omission that he pulled his name from the stand-by list and later copped flak from Deschamps. The biggest surprise selection, meanwhile, is Thomas Lemar, who had a sub-par season with AS Monaco but was selected by the coach.

The key man for Les Bleus will once again be their talisman, while Olivier Giroud will be a pivotal player as well, having scored the most goals for the country under the tutelage of Deschamps. Meanwhile, Kylian Mbappe will be looking to finally come good on his promise at the international scene as well.

Deschamps took over the reins of the France National Side from Laurent Blanc in the aftermath of the UEFA Euro 2012 where they were eliminated in the quarter-finals by eventual winners Spain. Initially signing on a two-year deal, the 1998 winning captain has since remained in-charge.

He first led France to an impressive quarter-final finish in the 2014 FIFA World Cup before reaching the final of UEFA Euro 2016 at home, losing to Portugal in extra time. As he takes his side to Russia, the 49-year-old will be hoping to go all the way, especially with a largely settled squad at his disposal.

The France boss usually alternates between two formations, the 4-3-3 or the 4-4-2, depending on the opposition his side is facing up against. More often than not though, the 4-4-2 is the go-to formation for Deschamps, with Antoine Griezmann playing off the central striker, who is likely to be Olivier Giroud.

On the wings, Deschamps has an embarrassment of riches, but in-form duo of Ousmane Dembele and Kylian Mbappe are likely to get the nod on the right and left flanks, respectively, with Dembele supplying the balls for Giroud and Mbappe cutting in to create overloads in an around the opposition box.

In midfield, the manager has the luxury of having the tireless N’Golo Kante at his disposal, with the presence of the Chelsea man giving Paul Pogba the license to roam forward and join the attack. If Deschamps opts for a midfield trio though, Blaise Matuidi is likely to be the man to provide the energy in the middle.

The backline is largely settled, with Djibril Sidibe expected to be the right-back and the fit-again Benjamin Mendi starting on the left. The full-backs will provide a pacy outlet out wide, while Raphael Varane and Samuel Umtiti, two of the best ball-playing defenders, will sit at the heart of the defence, building play from the back and guarding Hugo Lloris. 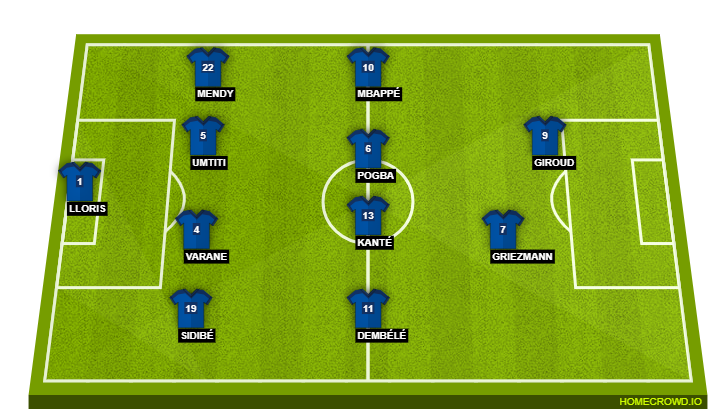 France have been drawn in one of the easier groups for the bigger nations, with Group C opponents being Australia, Peru and Denmark. All three sides have very little experience in the World Cup, with their combined greatest achievement being two quarter-final appearances.

Les Bleus will undoubtedly be fancied to steamroll through their group and possibly meet another lowly outfit in the Round of 16 – the Group D runners-up. With a settled squad at his disposal, anything less than a semi-final finish should be chalked off as a failure, considering a more inexperienced side reached the Last Eight in the 2014 edition.