We take a look at some of the best English Championship Playoff Finals to be played out in the history of English football.

The EFL Championship playoff final has been called the single most valuable football match in the world.

Often the final is equally as exciting to watch as it is rich. Case in point, these unforgettable finishes to the grueling Championship/First Division season.

In the playoff system’s first three years, the final was played over two legs. While the single match winner-takes-all format has added more drama to the game on an annual basis, the old way had the kind of excitement only aggregate scoring can bring.

The prime example of this was the 1989 affair between Blackburn and Crystal Palace.

A late Simon Garner goal closed out the first leg with a 3-1 advantage for Blackburn. But, that single Palace goal proved to be monumental in the second leg, which went to extra time. Three minutes from a shootout, Ian Wright hit home a header that raised Palace to the top flight and devolved Selhurst Park into delirium.

One of Eurosport’s 100 Greatest Football Matches of All-Time, the First Division’s 1993 finale has become a gold standard all other finals are judged against. After surrendering three goals in the minutes before half time, Leicester looked like they were going to repeat the previous year’s failure in the final.

The one that got away? (Picture Courtesy – SwindonAdvertiser.co.uk)

But this time the Foxes recoiled and in a span of 12 minutes the match was tied 3-3. With the tension and drama peaking, substitute Steve White went down in the box to earn Swindon a questionable penalty. Paul Bodin scored from the spot to restore the Robins’ lead and preserve Leicester’s First Division status for another year.

Due to the Premier League downsizing from 22 clubs to just 20, the 1994-95 First Division saw increased stakes with just two promotion spots available. That meant even though Reading finished second in the table, they still had to battle through Tranmere in the semis and Bolton in the final.

And a battle it was. Twelve minutes in, Reading was up 2-0 but Owen Coyle and Fabian de Freitas equalised matters late in the second half. The Royals, though, weren’t able to make a similar comeback after going down to two goals in extra time.

The 1996 play-off final featured two sides that were no stranger to late-May matches in Wembley. Either Leicester or Palace had appeared in the final four of the last seven years and that experience showed in the classic that ensued between them.

Palace found their feet first, scoring in the 14th minute courtesy of an Andy Roberts strike.

After being run ragged the rest of the first half, Leicester came out resilient in the second and equalised with a converted Gary Parker penalty in the 76th. With penalty kicks looming near the end of extra time, Steve Claridge then famously ‘shinned’ the ball into net and put Leicester back into the top flight.

Sunderland and Charlton finished two points apart in the 1997-98 First Division table. Their playoff final would be equally as tight a finish. Both sides had their chances in the first half, but it was Charlton that came out ahead at the half-time whistle.

That tame 1-0 scoreline then exploded into a second-half goal frenzy – the game going into extra-time with the scoreline tied at 4-4.

Sunderland’s Nicky Summerbee 99th minute goal was negated in the 103rd by Clive Mendonca’s third on the day. In penalties, both sides made their first six kicks. That put Sunderland’s Michael Gray to spot who would miss the only penalty on the day, sending Charlton to the Premiership instead.

For a few weeks in the 1981-82 campaign, Swansea looked like they were going to win the first division title. The following season they were relegated and spent much of the ensuing decades mostly in the third and fourth tiers. But in 2011 they finally had their shot to return to the top flight, needing a win over Reading at Wembley.

The Swans went up 3-0 in the first half, and promotion looked to be almost secured.

But, an own goal and a Matt Mills header in less than 10 minutes cut the Welsh-side’s lead to one. After an intense 20 minutes, Andy Griffin recklessly took down Fabio Borini in the box. Scott Sinclair converted the penalty for his third goal on the day, finally sending Swansea back to the Premiership promise land.

After being relegated at the end of 2010-11 Premiership season, new manager Sam Allardyce promised to have West Ham back to the top flight in a season’s time. Online sportsbooks (which let you bet on every single Championship match) also liked West Ham’s chances, listing them as the betting favourite for promotion.

After barely missing out on automatic promotion, they waltzed through Cardiff City 5-0 on aggregate in the semis. This clearly shows the shocks and surprises in football. And playoff finals are full of them.

As a result, this is creating a buzz at online gambling sites and more people are interested in getting involved by the day. Technology & gambling providers aid their cause by supplying sports betting options over the entire world like Australia and UK. A bettor can simply put bets with the click of a button (Whether its pre-match or in-play). 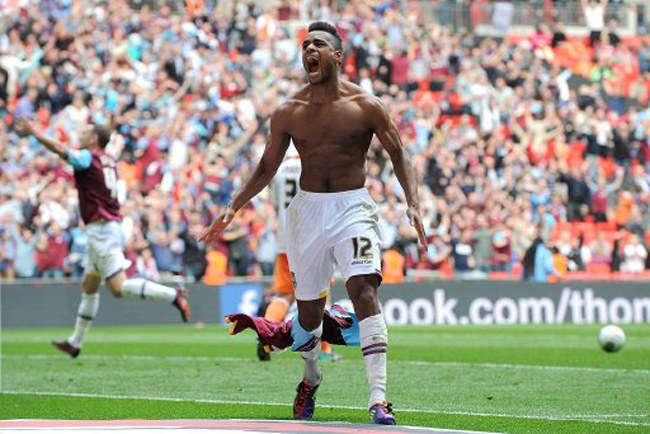 That set up a date with Blackpool – also trying to gain immediate promotion back to the PL. Carlton Cole’s 35th minute score put the Hammers ahead at the break, but Tom Ince leveled things soon after for The Seasiders.

With many expecting extra-time, Ricardo Vaz Te instead capitalised on a loose ball in the box to send West Ham back up and help Big Sam deliver on his big promise.