You are here: Home » blogs » Talking Tactics: How would Eden Hazard fit in at Real Madrid?
Football News 24/7

We take an analytical look as to the ways how Zinedine Zidane can deploy Eden Hazard successfully, if the player does end up leaving Chelsea for Real Madrid

Eden Hazard is a name that resonates potential greatness. Not to say that he isn’t great already. The Belgian has grown leaps and bounds since joining Chelsea from LOSC Lille. He has managed to get his hands on the Premier League trophy, League Cup and the UEFA Europa League.

And as the Belgian is on course to add to his maiden Premier League medal, the player, who is now 26, is being linked heavily to Real Madrid – a move that some deem necessary in order for Eden Hazard to fulfill his potential and achieve what someone with his talent should.

Technically gifted and physically adept, the player would be a great fit within the Real Madrid squad, especially with the first-team squad being managed by Eden Hazard’s idol – Zinedine Zidane. A world-record bid is touted to be in the offing in the summer – a proposition that is unlikely to scare Real Madrid.

However, even if Real Madrid do end up signing the player, his role within the first-team squad has to be defined first. Hazard would not join Real unless he is promised the role of a key player – a starter – and it makes one wonder just how Zidane will be able to accommodate the player into the starting eleven.

With the rise of Marco Asensio and even Lucas Vazquez, there could be a lot of problems for Zidane. The Hard Tackle looks to make sense of the chaos and offer a few propositions as to how Hazard could fit in at Real Madrid. 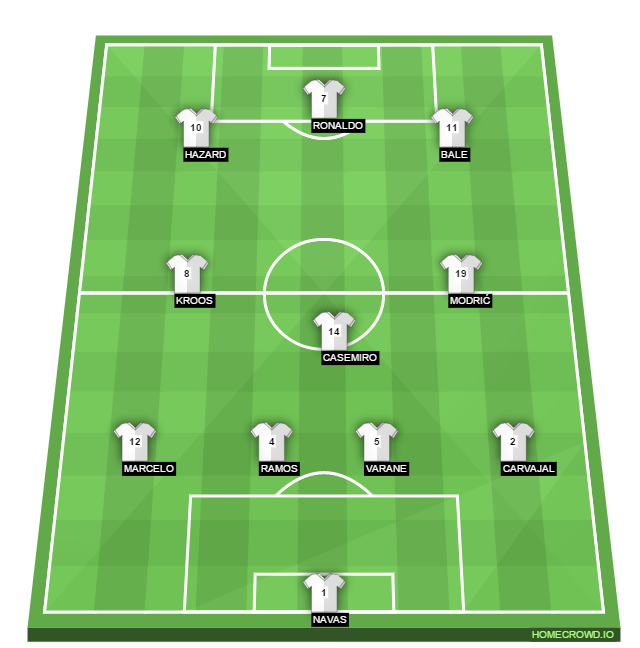 Assuming the formation is kept the same – a modern variety of a 4-3-3 wherein a player like Casemiro will act as the holding midfielder, while the likes of Luka Modric and Toni Kroos are to perform the duties of a box-to-box midfielder with other specifically distributed duties – this could very well be a true solution.

Ronaldo has often iterated his desire to shift permanently to a central role. The Portuguese is far from the player he used to be – putting fear into the opponents with his pace and flair. However, what he has lost in pace, he has gained in terms of predatory instincts.

Ronaldo has transitioned beautifully from a winger to a wide forward and his performances show he is the perfect solution to Zidane’s centre-forward problem. Karim Benzema has been often ridiculed by the fans, and Alvaro Morata has not managed to replicate his Juventus exploits at Santiago Bernabeu.

Both of them have been linked with potential exits from the club in the summer. And given the money that has been touted in each of those transactions – it would make sense to let them go. To compensate, the manager can shift Ronaldo the centre-forward role while Hazard slots in on the left wing.

Hazard has played a large majority of his games as a left winger and his record at Chelsea in that position – 49 goals and 44 assists in 166 appearances – exemplifies that he excels at the aforementioned role. 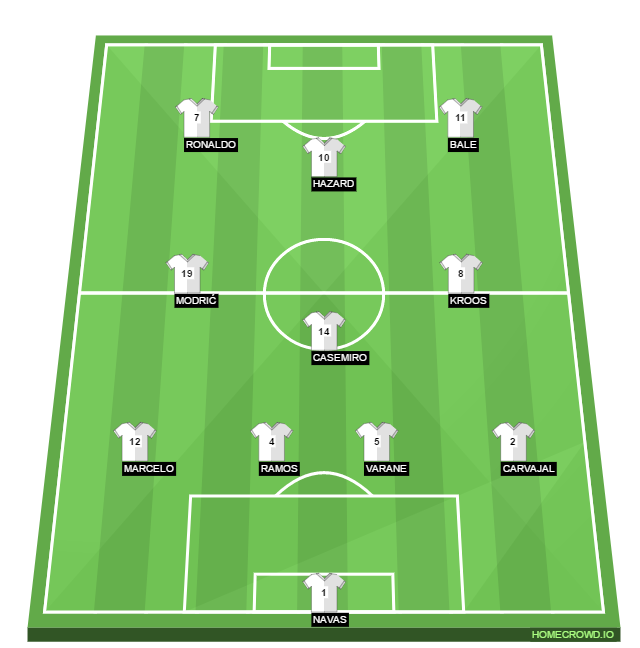 This could be a very controversial move as Real Madrid are famed for their history of out-and-out forwards. The move could bring about a change contrary to the culture of the club. However, Zidane has instilled some sense of a possession-based game under him, and a False Nine formation is often the best in terms of dominating possession.

With Hazard deployed as a False Nine, Ronaldo and Bale can make darting runs behind the last defender and the creativity present in the squad is likely to enable them to find those runs a few times, at the very least in the ninety minutes.

Also, Hazard has been hailed for his dribbling ability and the ability to get past a player with ease – skills that Ronaldo had mastered earlier – make it an absolute necessity to get the ball deep, a fair distance away from the goal, in order to have an impact.

We still see Ronaldo come deep to get the ball, but he has become less successful in his take-ons and is often seen coming deep just to get on the ball in order to attempt a long shot at the goal. However, with Hazard deployed as the False Nine, the Portuguese can now focus on the scoring aspect of the game.

Hazard’s ability is sure to draw defenders towards him which could also be utilised superbly by Ronaldo and Bale. Even though Hazard hasn’t quite played much as a False Nine – only 6 matches for Chelsea till date, there is a sense of belief that Hazard has the ability, the strength and the creative level to excel in the position.

Hazard as an Attacking Midfielder/ Trequartista; Ronaldo-Bale as the forward duo 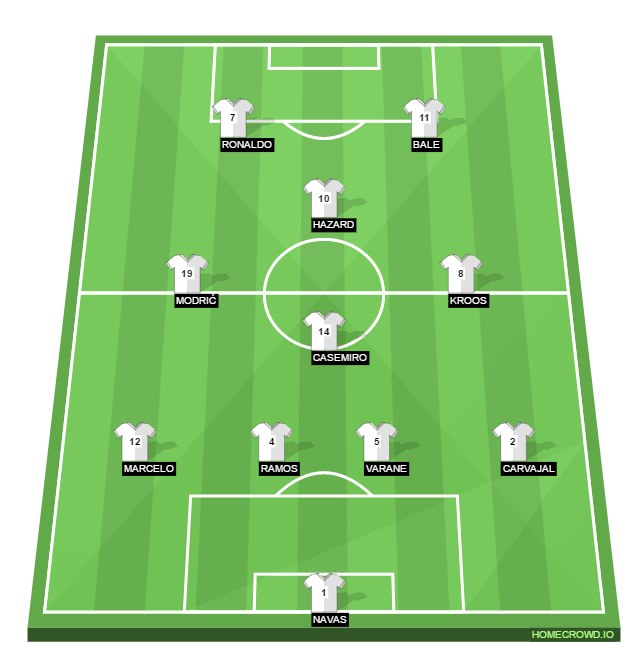 Now, there have been varying reports that Bale, too, wants to move centrally, which could drive him up against Ronaldo. However, if Hazard arrives at Santiago Bernabeu, the aforementioned tactic can put an end to the debate of who ought to be given a central role.

Marcelo, as is, plays more like a left wing-back than a left-back, and Real Madrid are sure to bring in a quality right-back in the summer. The modern game has seen more marauding left-backs and less left-sided defenders and this formation could use it to the optimum level.

Playing Hazard as an attacking midfielder will provide the Belgian the opportunity to relish in a creative role while also being able to make darting runs in the middle of the pitch and attempting the occasional shot at goal.

We have seen this season that Hazard coming deep to get on the ball is a terrorizing proposition for the other teams and the same could happen at the Bernabeu. The move would also open up the forward role for Ronaldo and Bale whose directness can yield destructive results.

All in all, there are numerous ways to incorporate Hazard. Eden Hazard’s favourite jersey number is 10, which could be up for grabs especially with the player who currently wears the number – James Rodriguez – heavily linked with a move away from the club.

A move for Eden Hazard would outline Real Madrid’s intention to continue recruiting superstars for their first-team squad. As far as Eden goes, he might finally prove to the world that he has reached the level his former manager Mourinho states he has.