You are here: Home » blogs » 3 formations Jose Mourinho could use at Manchester United this season
Football News 24/7

The signing of Paul Pogba means that Jose Mourinho’s promised quartet of new players is now complete. The Manchester United manager now has a very good squad to choose from, as he integrates the new signings with the players left behind by Louis van Gaal.

The Special One has made some decisive signings this summer. Striker Zlatan Ibrahimovic joined from PSG, centre-back Eric Bally from Villarreal and attacking midfielder Henrikh Mkhitaryan from Borussia Dortmund. The arrival of central midfielder Paul Pogba from Juventus wraps up a complete overhaul of the spine of the Manchester United team.

The four will combine with the Red Devils who impressed last season, like Anthony Martial, Chris Smalling and Marcus Rashford, as the club try to play their way back to the pinnacle of European club football.

Here are three possible formations manager Jose Mourinho is likely to use this season.

This would put the best players in their favoured positions, as all of the new signings complement the stalwarts of the last few seasons to form the strongest Man United XI. On paper, this line-up will almost look like a fantasy football team.

The iconic Zlatan Ibrahimovic will lead the line ahead of Wayne Rooney in a deeper role, with the prodigious French wonderkid Anthony Martial on the left wing and Bundesliga Player of the season Henrikh Mkhitartan on the right. Paul Pogba obviously gets into central midfield, alongside his compatriot and the more defense oriented Morgan Schneiderlin. 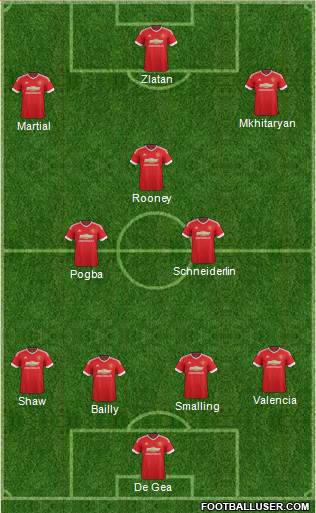 Jose Mourinho could also find some use for the players that Louis van Gaal rated highly in his two years in charge of Manchester United. The Portuguese manager has always had massive respect for his former mentor at Barcelona, even thanking him after winning the Community Shield recently.

The manager could find use for the likes of the versatile Dutchman Daley Blind and Italian full-back Matteo Darmian in defence. Valencia’s poor offside awareness could be a factor here, while Blind has had a relatively good pre-season for the Red Devils. Jesse Lingard could also oust new signing Mkhitaryan, given his performances in the FA Cup final and Community Shield. In fact this will closely resemble the line-up Mourinho had for the Community Shield game against Leicester City, his first competitive match as Manchester United manager.

However, the most contentious part of this line-up, at least for most of the Manchester United fans, would be the inclusion of Belgian midfielder Marouane Fellaini. Mourinho seems impressed with Fellaini, playing him regularly in pre-season. The 28-year-old’s physical prowess and height make him a player who is definitely in contention for a spot in central midfield. 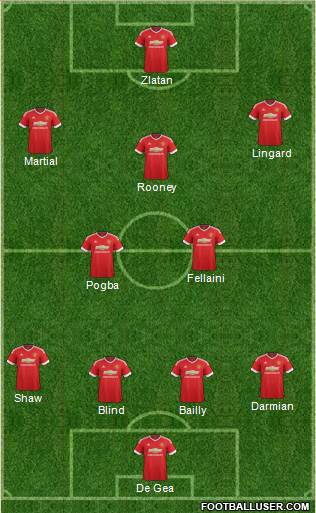 One of the biggest headaches that Jose Mourinho will have this coming season is club captain Wayne Rooney. The 30-year-old Englishman is his country’s highest ever goal scorer, and is closing in on Sir Bobby Charlton’s all-time goalscoring record for United.

However, the former Everton striker’s performances of late have drawn criticism from all corners. He will definitely not take up the role of central striker that he played under Van Gaal. Mourinho has stated that he will play Rooney in a deeper role, but in an attacking position nonetheless.

Rooney was lackluster in the game against Leicester City. After scoring just 8 league goals and being unimpressive in general last season, this cannot be dismissed as a one off performance. Mourinho may well be forced to drop the captain in the coming season for the betterment of the team. This would provide an opportunity to teen sensation Marcus Rashford to lead the line and continue his impressive development, with Zlatan dropping into the no. 10 role. 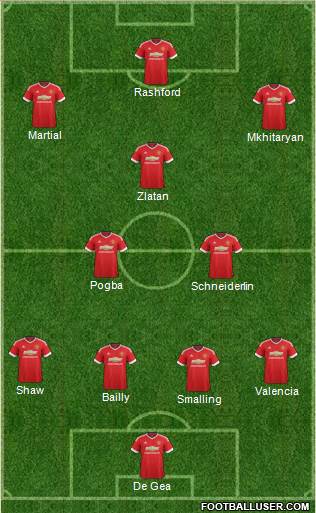