You are here: Home » blogs » Euro 2016: Griezmann and Pogba crucial for France to be crowned champions at home
Football News 24/7

France start this tournament as strong favourites, and the likes of Anthony Martial, Antoine Griezmann, Olivier Giroud and Paul Pogba will look to give this traditional footballing powerhouse reason to cheer after their preparations for Euro 2016 were overshadowed by terror attacks, racism rows and player controversies.

Just a few weeks before Euro 2016, France national manager Didier Deschamps was accused of racism in his squad selection, first by Manchester United legend Eric Cantona and then by one of the victims of the alleged racism Karim Benzema. The Real Madrid striker’s accusatory finger isn’t unsoiled either, with Benzema embroiled in a sex-tape scandal that has derailed his career and that of Mathieu Valbuena, the other French international involved in the case.

However all this controversy will be the least of France’s concern, as they hope to win their first European championship since 2000. Their record in big tournaments at home speaks for itself, and fans are expecting the current side to match up to the Zinedine Zidane anchored side that won the 1998 World Cup. Les Blues also won the Euros the last time they hosted it, way back in 1984.

Attack and midfield loaded with talent

With the emergence of Anthony Martial, who scored 17 goals in his debut season for Manchester United, and Antoine Griezmann, who set the UEFA Champions League alight with his crucial goals for Atletico Madrid, Les Blues have two of the world’s most coveted attacking players right now. However, it is likely that neither will be playing as target man, with the mercurial Olivier Giroud cementing his place as top striker in the absence of Karim Benzema in the run up to the tournament.

Their midfield riches are equally enviable, with Juventus hero Paul Pogba considered to be one of the top three players in the world today by many hoping to play a definitive role in this tournament. The rise of two Premier League anchors, West Ham United’s Dimitri Payet and Leicester City’s N’golo Kante, has given the manager a tough decision as PSG pair Blaise Matuidi and Lassana Diarra are also game changers in their own right.

Tottenham goalkeeper Hugo Lloris had yet another outstanding season in the Premier League and is definitely one of the top keepers in the tournament. His assured presence between the sticks is something that France will be heavily depending on, given the slightly suspect defence that is likely to start ahead of him.

Injuries to Raphael Varane and Kurt Zouma, and the doping storm around Liverpool center-back Mamdou Sakho, means that Deschamps will have to turn to Manchester City’s Eliaquim Mangala as his only practical choice to partner with Laurent Koscielny in the center of the back four.

At full-back, France have two experienced veterans in Patrice Evra and Bacary Sagna, but with both players well above 30 years of age, their decreasing pace and agility could be exposed in a position which requires a lot of running.

France will most likely be playing a fluid and fast 4-3-3, a formation used extensively by Deschamps in the run-up to Euro 2016. The back four pretty much picks itself, with Hugo Lloris having a huge role in anchoring the defence. Just ahead N’golo Kante will be expected to repeat his tough-tackling and interception infused performances that have taken Leicester City to the top of the Premier League.

Given the assurance of Kante, Paul Pogba and Blaise Matuidi have the freedom to roam ahead and set up attacks as they hope to feed the target men. Striker roles can be interchanged given that Olivier Giroud, Antoine Griezmann and Anthony Martial are all capable of leading the line and could well set the tournament on fire if they manage to link up well. 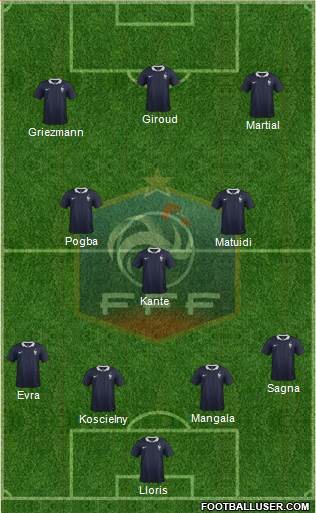 France will qualify with ease from the group Stage, a certainty considering their initial opponents, but from then on they would need to overcome other tournament heavyweights. The likes of Belgium, Germany and England seem like other strong runners to go all the way, and would provide a litmus test to France’s abilities in the knock-out stages.

However, with the depth of talent in this French side it would be a huge shock if they bowed out of the competition at any stage before the Finals. Les Blues are strong contenders to win Euro 2016 and there’s clearly not enough reason to suggest otherwise. This is the biggest chance for the rising talents of Martial, Pogba, Kante and Griezmann to cement their places in history, while it could be a swansong for the hardworking pair of Patrice Evra and Bacary Sagna.