In their first match of the New Year, Manchester United will look to overcome the ‘ghosts’ of their past as they welcome Swansea City to Old Trafford, a team they have lost to in their previous 3 league encounters.

Swansea City were the first team to hand Manchester United a loss, as Bafetimbi Gomis scored the winner in a 2-1 comeback at the Liberty Stadium and Swansea continued their brilliant start to the season, but things have changed drastically since then for both teams. The Swans now find themselves hovering above the relegation zone and without Manager Garry Monk, who was given the sack during a particularly bad run of results.

Manchester United on the other hand have seen themselves knocked out of the Champions League and the Premier League top 4, but will take heart from their performance in their last match in 2015 against Chelsea, where they put in a spirited show that was perhaps not reflected in the goalless scoreline. The Red Devils will now look to turn around their run of form against a team Louis van Gaal referred to as a ‘ghost’ team, who have won all 3 of their previous league encounters.

The Red Devils can no longer hide behind the excuse of injury problems as they boast of a relatively fit side, with the exception of long term absentee Luke Shaw and a few others. Wayne Rooney is having a terrible campaign, but not as bad as Memphis Depay, and will thus most likely be starting in the central strikers position ahead of Anthony Martial who will play on the left wing instead of Depay, with Mata on the right.

But Rooney may switch around with Martial as he lacks the pace that the Frenchman possesses and could well play a supporting role. In the hole behind him, Ander Herrera will form the fulcrum of the attack as he will look to link up with the attacking players as well as venture down the wings to provide crosses and key passes.

Morgan Schneiderlin will shield the defence in the holding midfield position, partnered by Bastian Schweinsteiger, who would seek to be the more attacking of the pair, but Schneiderlin will have his task cut out for him as he tries to help the wounded Manchester United defence back to their frugal ways. A task which Chris Smalling seems to be the man for as his inspiring defensive performances this season can show the way to the likes of Daley Blind and Matteo Darmian. Ashley Young is still adjusting to his new role of left back, but has played enough in the position to know what’s expected of him and he could prove a potent attacking threat down the wing.

David de Gea is, however, the man of the hour for Manchester United and the Spaniard showed exactly why he is held in such high regard after pulling off some brilliant saves against Chelsea FC. He will be crucial to Manchester United’s game if they have too many defensive lapses, which they are prone to having these days. 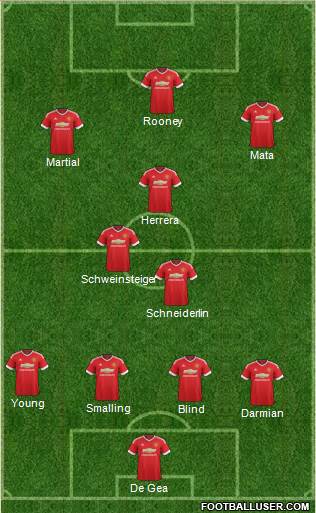 Swansea were firing on all fronts at the beginning of the season, but now find themselves in dire straights as interim manager Alan Curtis steadies the club after the sacking of iconic manager Garry Monk. They head into this fixture after a decent string of results though, as they remain unbeaten in their last 3 Premier League encounters.

Bafetimbi Gomis relishes this match and has scored the winning goal in two previous appearances for Swansea City versus Manchester United, but he’s now going through a shoddy patch of form, but will still be an important factor in the game. He will be part of a strong strike force that also consists of Andre Ayew, who was recently nominated for the African Player of the Year award for his exploits in France, which he will look to emulate here.

In Midfield, Jonjo Shelvey is trying hard to find the kind of form that saw him break into the England national squad earlier this season, while Ki Sung-Yeong and Gyllfi Sugurdsson are both attacking threats on their day. Swansea will look to sit back in defense and attack on the counter, hoping that Manchester United slip up as they focus on keeping possession. 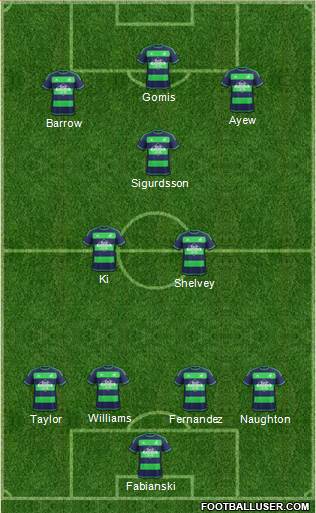 Player to watch out for:-

The Frenchman finally found the back of the net again in the match against Norwich City which Manchester United lost 2-1 and was very impressive in their last game against Chelsea. He will be raring to prove that he is capable of getting goals for his club and has the dribbling ability, pace and strength to worry the Swansea defence. He showed glimpses of his ability early on in his Premier League career, but needs to serve up a reminder and that’s exactly what he’ll be looking to do against the Swans.

The Red Devils simply cannot lose this fixture for the fourth time in a row. It’s their first match of the year and they will look to hit the ground running as Louis van Gaal’s future, as well as those of many other young players under him, hang in the balance.

Manchester United will eke out a narrow victory and take advantage of Swansea’s faltering form and the fact that Old Trafford, though no longer a fortress, gives them the upper hand.