Manchester United travel to Germany for a crucial Champions League tie against Wolfsburg with the shadow of an injury crisis hanging over them. This match could decide whether or not the English Premier League side will progress beyond the group stages of the competition.

Group B has turned out to be one of the most competitive groups in the Champions League with Wolfsburg leading the group by one point and 2nd placed Manchester United ahead of Dutch club PSV Eindhoven by just a point too.

This means that if PSV were to lose or draw against CSKA Moscow, who are now fighting for a 3rd place finish and a chance to compete in the Europa League, then a draw would be enough to take both the current top 2 teams through. But a win for the Dutch side would make this a must-win encounter for either team, so if Manchester United want to be sure of qualification they have to look for a victory in Germany, while the scenario is pretty much the same for Wolfsburg as well.

Dieter Hecking will look to emulate his sides performance in the closing stages of their last encounter against Manchester United, when it looked like a German battering ram was constantly banging against the wall of the United defence. In this respect, he needs striker Bas Dost to emulate his prolific goal scoring form of last season. He is a goal poacher that the Red Devils need to beware of as he is capable of popping up in the penalty area and sneak one in at the opportune moment.

Right behind him will be the immensely talented Julian Draxler, who is a highly touted young German player capable of creating chances and taking shots himself. His compatriot Andre Schurrle has experience at the premier league with Chelsea and will be a threat on the wing along with Daniel Caliguiri.

Their holding midfielders Maximilian Arnold and Frenchman Josuha Guilavogui, along with their defensive core of Dante and Naldo, will look to stifle the Manchester United attacks further up the pitch and contain the threats of Depay, Martial and co. The German side showed last time around that they were capable of putting the Red Devils under pressure by beating them at their own game, possession, and will look to do it again this time around. 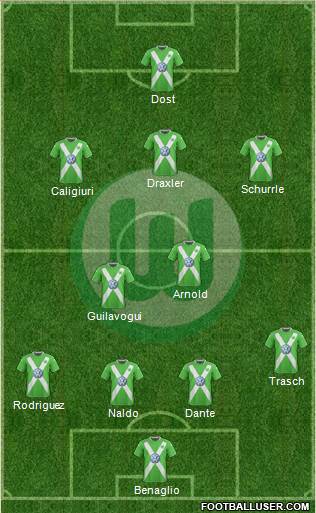 The Red Devils will be missing key players like Wayne Rooney and Morgan Schneiderlin in the crucial encounter against Wolfsburg but have enough depth in their squad to assemble a staring XI that is more than capable of bringing the game to the Germans.

It has been argued that Manchester United have been playing better without their misfiring captain in the starting line up and this is a chance for the youngsters to prove their mettle. Anthony Martial will start in the front of the line, while Memphis Depay should be started in this game given his impressive form in the last few games. Jesse Lingard has also been a goal scoring threat and should link up well with Martial and Depay, like he did in the game against Watford and the pacy trio can cause all sorts of trouble for Wolfsburg.

Schweinsteiger and Carrick are probably the most decorated and experienced pair of holding midfielders in any club right now and will look to draw on that to control the midfield and feed the attacker with Carrick sitting back and making incisive passes and Schweinsteiger running forward to help attacking play.

Chris Smalling has been rock solid in defence and will look to rally the likes of inexperienced Paddy McNair and out-of-form Matteo Darmian into a formidable back four with Daley Blind. They are assured of the expertise and masterful skills of David de Gea, who is in the form of his life and looking like one of the best goalkeepers in the world, behind them in goal. 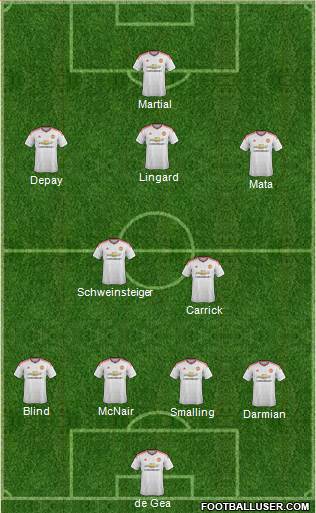 Player to Look Out For:-

The Dutchman has just returned to action in the past few weeks after being dropped for his insipid performances and has been impressing so far. He will be looking at this game as his chance to make a statement and regain the faith of the fans and coach Louis van Gaal. Expect him to create chances and trick his way past the defence from the left flank and take a few long range shots.

This is a must win clash for Manchester United and they will head into the match with the criticism and jeers of the fans ringing in their heads and this will surely fire them up for the game. While Manchester United’s injuries have added a youthful exuberance to the attack, their two key defensive players, de Gea and Smalling are primed and ready for action. Wolfsburg have not been in the best of form of late and the Red Devils will hopefully rise to the occasion and make their way into the round of 16 with a victory.