Manchester City will look to continue their run of good form at the weekend as they face off against a Stoke City side that have failed to live up to the big pre-season expectations.

On Saturday, Manuel Pellegrini’s men will be fielding their strongest attacking line up as two of their biggest players come back from injury and they may prove to be a difficult hurdle for 12th placed Stoke City to overcome. While the citizens are currently top of the league, equal on points with Leicester City, Stoke languish in the bottom half of the table and are coming off a defeat to struggling Sunderland.

The form that Manchester City are in has seen them rack up 9 wins, the most in the premier league so far, and Stoke will look to use the immense talent at their disposal to provide competition to the citizens and appease the fans at the Britannia stadium. The Potters have had 5 clean sheets in their last 7 games, but it will be difficult for them to extend that run against the likes of Kevin de Bruyne, Sergio Aguero and David Silva.

Stoke City have seriously underwhelmed this season after making the high profile signings that they have over the summer. Mark Hughes men will look to their attack to breach Manchester City’s defence since it is probable that they will concede goals against Manchester City’s rampaging forward line.

The Potters will look to the flanks as their talented duo of former Bayern Munich man ‘the Messi of the Alps’ Xherdan Shaquiri and ex-Inter man Marko Arnautovic, who scored the winning goal against Chelsea FC earlier this season. They will look to link up with lone striker Jonathan Walters and forward Mame Biram Diouf could well make an impact coming off the bench.

In midfield, Charlie Adam provides a long range threat as he likes to take shots from the middle of the pitch and might look to embarrass Manchester City’s stand in goalkeeper Willie Caballero.

They will be boosted by the return of their captain Ryan Shawcross to the heart of the defense, while English goalkeeper Jack Butland has been putting up the kind of performances that have seen him attract interest from a few top clubs in the Premier League. he will be looking to showcase his ability against of the best attacks of the league. 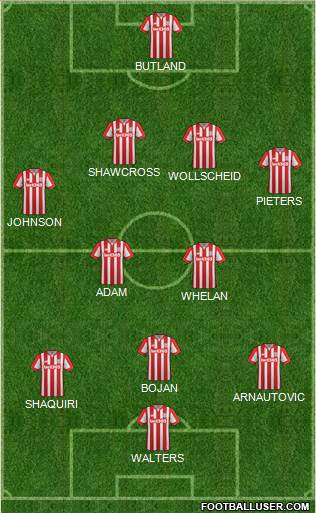 Manuel Pellegrini can now call upon one of the most devastating strike forces in Europe as David Silva and Sergio Aguero return from injury. The duo, combined with Belgian Kevin de Bruyne and England starlet Raheem Sterling provide a heady mix of talent, creativity, pace and goal scoring prowess.

David Silva is the most creative player in the league, Sergio Aguero will be looking to target the top of the scorers chart which he has made his personal spot over the years and Kevin de Bruyne has been in devastating form since arriving at the club this summer. The pace and guile of Sterling down the left wing will provide that much more threat to the opponents defence. The only respite for Stoke is that Aguero might come off at half time due to his fitness problems, but Wilfried Bony is no less of a goal scoring threat.

City will miss Yaya Toure and his dominating presence in the midfield, but Fernandinho is no push over, while Fabian Delph will be anxious to build on the debut goal he scored for the citizens against Southampton.

Defensively, City have a few problems to deal with due to the absence of two of the clubs mainstays, Vincent Kompany and Joe Hart. Nicolas Otamendi and Martin Dimechelis form a decent central defensive partnership, with Aleksander Kolarov being a very effective and attacking left back. Willie Caballero had a nightmare in his match against Tottenham, but redeemed himself in the Southampton game. 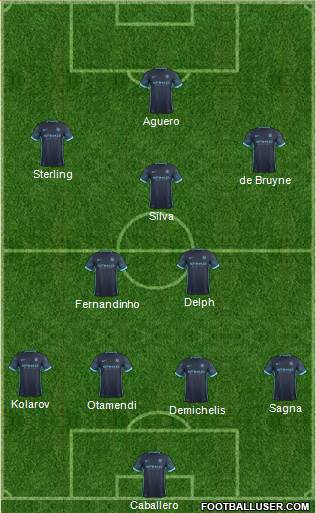 David Silva is widely regarded as the most skillful player in a star studded Manchester City line up. He is the most creative player in the premier league, registering assists and goals on a regular basis, and will be waiting to get back into his best form after a lengthy lay off due to injury. Expect him to outwit and bamboozle the opposition defence with his timely runs, vision and guile.

The attacking prowess of Manchester City could prove to be too much for a Stoke City side that has been under performing. They might be able to steal a goal against the citizens shaky defence and Jack Butland may pull off a few amazing saves, but the Potters will probably fall short of the challenge as title contenders Manchester City move forward to their ultimate goal of premier league triumph.