The atmosphere at the King Power Stadium will be celebratory after Leicester City’s amazing year as the Citizens and the Foxes face off in a must win clash between two title contenders. A win is essential if they want to keep their hopes of winning the 2015-16 Premier League title alive heading into the New Year.

The high flying Foxes were handed just their second league defeat this season on Saturday, as Liverpool rode on Christian Benteke’s goal to nick a win against the Leicester City. Manchester City, meanwhile, were beaten by Arsenal before hammering relegation battling Sunderland and this run of results has set up the match between the two quite nicely.

Leicester City are just 3 points ahead of the Citizens and a win would see them go top of the table to close out the year. However, Arsenal have gone one point clear at the top of the table after they beat AFC Bournemouth on Monday and it looks like the Foxes face a stern test of their title credentials at the King Power Stadium on Tuesday.

For the Foxes it will be all about fast paced runs and attacking on the counter, which they have done excellently all season and they will look to their attacking players to snatch the momentum away from Manchester City. Manager Claudio Ranieri is well aware of the firepower at Manchester City’s disposal and knows that if his side is to win, scoring is necessary and will instill this in his players.

Up front Jamie Vardy should be fit for the game after illness held him back in the match against Liverpool and he is partnered by the equally dangerous Shinji Okazaki. The two will prove to be problematic for a suspect Manchester City defense and Riyad Mahrez will look to cut in on the action from the wing.

Christian Fuchs has also been an important element to Leicester City’s attacks and the left-back may cause a few headaches for the Citizens. Leicester City have not been the best of sides defensively, so center backs Robert Huth, Wes Morgan and goalkeeper Kasper Schmeichel have to be on top of their game to get the better of Manchester City’s attacking players 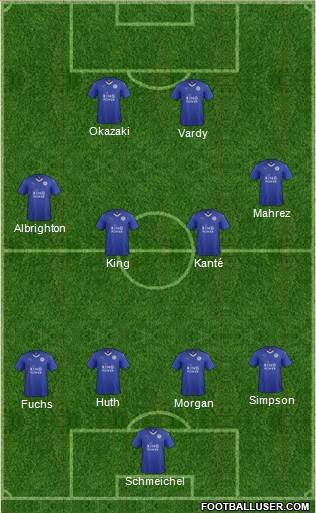 Sergio Aguero has slowly been easing himself into the scheme of things after an injury lay off and could well start the match against Leicester City to give the Citizens that cutting edge in attack. Their creative midfield will look to supply the Argentine, with Kevin de Bruyne having a ball of a time in the Premier League so far, with David Silva yet to reach those heights that he is known for. Expect both to play a key role in Manchester City’s attacking play.

In Midfield, Yaya Toure had a mercurial game last time Manchester City played top table opposition, but his experience and skill, coupled with physical strength, could well take the game away from Leicester City if he gets going, but shielding the defence is something that the manager would have spoken to him about, especially against the likes of Vardy & Co.

Defensively, Manchester City are just not the same without their Captain Vincent Kompany and they will be lacking his presence after he was forced off with an injury after a cameo appearance against Sunderland. So goalkeeper Joe Hart will have to be alert and active to ward off the Foxes counter attacking threat. 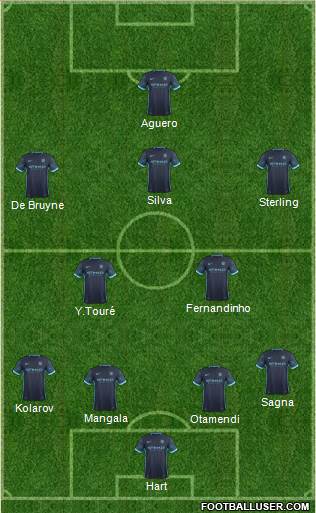 
Player to watch out for:-

It might have come as a surprise if one would pick Jamie Vardy over the likes of Raheem Sterling, David Silva and Sergio Aguero as the main attacking force in this game at the start of the season. But the Vardy express has blown up in a huge way and he is currently the top scorer in the Premier League 2015-16.

Leicester City’s striker extraordinaire wasn’t at his best in the game against Liverpool, since apparently he was battling a bout of the flu. But the English striker will be back on his game against Manchester City and could play a crucial result in the outcome of this match as he caps off a record-breaking year.

The Foxes will be riding the high of an overwhelming 2015 in front of their home fans, while Manchester City will rue the absence of their defensive linchpin Vincent Kompany. If Leicester City can make the best of the Citizens shaky defence and woeful away form then they can hope to nick this game by a narrow margin and end the year on a good note, but a draw could well be within their reach.

An early goal by either side could prove to be decisive, but Leicester have the home advantage and will be banking on their strike duo of Vardy and Mahrez to show up Manchester City’s star studded line up.