Bundesliga is geared up for another top table clash between the 2nd placed Wolfsburg and another Champions League spot contender Bayern Leverkusen. The Wolves have been on the hunt since the start of Ruckrunde taking Bayern Municha s scalp in a 4-1 rout then after a tough 1-1 draw against Eintracht Frankfurt in the next match, Dieter Heckinga s men were back to their ruthless best in a 3-0 win against TSG Hoffenheim on Matchday 20. Meanwhile Leverkusen managed only 4 points since the start of second half of the season. Scrappy performances against Borussia Dortmund and Hertha Berlin were compounded into a defeat against a resurgent SV Werder Bremen has left Bayer low on confidence. Roger Schmidt will be anxious about his teama s chances against the high flying Wolves as they look to bounce back to form after an uninspiring start to 2015.

Roger Schmidta s men had an unconvincing start to the Ruckrunde, which started with a sluggish 0-0 home draw against struggling Borussia Dortmund. The result was the consequence of poor finishing at both ends but the outcome of the draw hit both the teams. Dortmund slipped to the bottom of the table and Werkself too dropped to 6th spot behind FC Augsburg. The win against Hertha Berlin in which Stefan Kiessling scored the gamea s only goal wasnt a confidence booster for the Lower Saxony Club as they were quiet for most of the game. It was only that lady luck saved Leverkusen from another goalless draw with goalscorer Kiessling himself admitting that he was in the right place at the right time to score the goal. These performances resulted in an agonizing 2-1 defeat against a recovering Werder Bremen side.

Stakes: It will be the Bay Arena club who has more to lose going into the clash against Wolfsburg this saturday. With Schalke and seasona s surprise package Augsburg continuing with their form has left Schmidta s men sixth in the table. But with only 2 points separating them from the 3rd and 4th placed teams, a win or draw would take them higher up the table. With Augsburg and Schalke both facing tough away fixtures against Werder Bremen and Frankfurt respectively, Leverkusen have the chance to go third if they manage to win against Wolfsburg. Tim Jedvaja s absence seems to clearly worry coach Roger Schmidt as the werkself defence looked shaky in his absence since Matchday 18. Against a sublime Wolfsburg attack which consists the likes of Kevin DeBruyne, Bas Dost and Andre Schurrle, it would be a test for Bayer back four as they were ran ragged by the Wolvea s stinging counter attacks in a 4-1 mauling on Matchday 4 at the Volkswagen Arena in September.

Possible Line-ups: Despite their below par performances, Roger Schmidt has gone with the same starting XI in his 4-4-2 formation since the start of second half of the season. Roberto Hilbert and Brazilian Wendell are likely to start as full-backs with Emir Spahic and Omer Toprak at the heart of the defence. Skipper Lars Bender will be pairing up with Gonzalo Castro in the central midfield while set-piece specialist Hakan Calhanoglu will be sharing the creative responsibility with Julian Brandt completing the middle four. Meanwhile, Stefan Kiessling and Karim Bellarabi will form the strike pair upfront to go up against the disciplined Wolves defence. 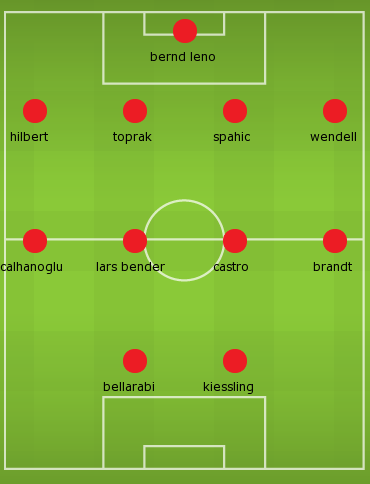 If there is any team that can possibly challenge Bayern Munich for the Bundesliga title, then it is Dieter Heckinga s men. They proved this point in their first match in seasona s second half by thumping four goals past Manuel Neuer and thus inflicting a painful first league defeat this season on Pep Guardiola. Kevin De Bruyne and Bas Dost ran the show at the Volkswagen Arena as they ripped apart Bayerna s defence with devastating counter-attacks and clever link-up play. The next game against a Eintracht Frankfurt was not the one Dieter Hecking has expected with Kevin De Bruyne again coming to the rescue scoring a 88th minute equalizer in a tense 1-1 draw. Meanwhile Bayern Munich also drew Schalke which kept the 8-point difference between them and Wolfsburg from stretching further. But in the next match against TSG Hoffenheim, new signing Andre Schurrle struck an immediate understanding with his fellow attacking duo Das Dost and De Bruyne as the Lower Saxons ran riot with three goals.

Stakes: Wolfsburg sit in a comfortable position in the table with 7 points separating them from their nearest rivals Schalke and 11 points away from their saturday opponents. But as the coach has insisted many times this season that securing Champions League is their prime target. They do not look to slow down at any point as Wolfsburg have been hitting the right notes at this crucial juncture in the season. A win at the Bay Arena wouldnt alter their position in the table but De Bruyne & Co. will keep up the pressure on Bayern. There hasnt been much concerns for Dieter Hecking in terms of injuries as well. But with Europa League just around the corner, Wolfsburg will be focussed to take away all three points from the Bay Arena.

Possible Line-ups: Dieter Hecking is likely to go with the same orthodox 4-2-3-1 and the starting XI that defeated Hoffenheim last week. The German manager would go with his usual centre-back partnership of Naldo and Robin Knoche who have solid throughout the campaign so far and Ricardo Rodriguez who scored the brace last time against Leverkusen will start at left-back with Vieirinha on the extreme right. Maximilian Arnold who played all the key passes in the match against Bayern will be the creative half in the central midfield alongside Luiz Gustavo. In the attack Ivan Perisic could once again make way for new signing Andre Schurrle on the wings with De Bruyne in the hole position and Daniel Caligiuri on the other wing. In form Dutch striker Bas Dost will most likely start as the lone striker upfront. 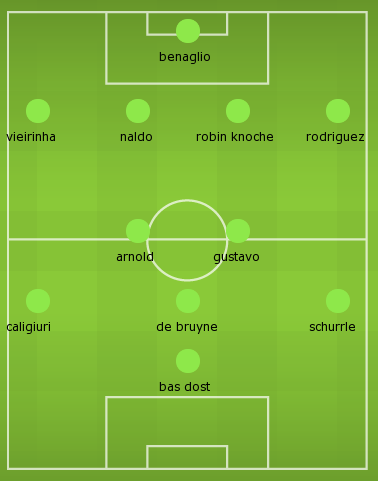 Duos To Watch Out

gainst Hoffenheim assisting all the three team goals. He clearly deserved his first goal in Wolfsburg jersey as his shot struck the crossbar for De Bruyne to head home on rebound. De Bruyne on the other hand looks unstoppable and his influence on Wolvesa game have seemingly doubled since the start of 2015. With already 5 goals and an assist in the last 3 matches it would take the Leverkusen defence to put in a good shift to tie the Belgian down.riker Bas Dost. Andre Schurrle has just arrived at Volkswagen Arena and the ex-Leverkusen man had a great first outing a

Even though Leverkusen are struggling to find rhythm to score from open play, Wolfsburg must be alert when defending Hakan Calhanoglua s free kicks. The Turkish midfielder can strike the ball from any distance and most of the Bundesliga goalkeepers have found it difficult to keep out his dipping strikes in dead-ball situations. Karim Bellarabi has been the livewire in Leverkusena s attack this season who is also the cluba s top scorer with 8 goals. Even though he could be kept quiet if his team mates dont offer proper help, Wolves could make life difficult for the home team if they put brakes on the German international.

Considering the form Wolfsburg are in and Leverkusen’s below par performances in the past few games, Wolves are the clear favourites going into saturday’s clash. Overall history might be in Leverkusen’s favour who have won the fixture 17 times but Wolfsburg are not far away with 13 wins out of 35 meetings. Last 5 fixtures have been dominated by the Wolves who won 3 matches and scored minimum of 3 goals in all of them. Wolfsburg clearly dominated the previous fixture at Volkswagen Arena in September as they thumped Bayer 4-1.