While the rise of Leicester City has given a whole new dimension to top of the table clashes, the match between Arsenal and Manchester City was always expected to be a big match and it proves to be exactly the case, with the teams on 2nd and 3rd position on the EPL table respectively, separated by just one point.

Manchester City seemed the odds-on favourites for the title in the first couple of months of the season, but seem to have lost that air of superiority of late and will be looking to remind the league of the dominating force they can be. Arsenal meanwhile have hit their stride again after a slump in form with wins over relegation battling sides Sunderland and Aston Villa.

Manchester City go into the match without having scored in their 3 previous away games and are likely to go in with all guns blazing. Having already beaten Manchester United and Bayern Munich at home, Arsenal will look to continue their impressive form at the Emirates stadium.

With the premier league being the roller coaster that it has been this season, this is a crucial match for both sides and they’ll be looking to go for the win so as to try and get close to Leicester City, rather than just settle for a point.

The biggest headache that Arsene Wenger has for this match is the injury to star player Alexis Sanchez. Though he is in training and fit, Wenger will probably start him on the bench to make sure that he doesn’t further exacerbate his hamstring problems.

This means that the onus is on Mesut Ozil and Olivier Giroud to provide the attacking spark for the Gunners as they have been doing for the past few games. Ozil will look to continue his brilliant form and add to his tally of 13 assists, while Giroud has hit back against the critics with a fine goal scoring patch and will look to be the decisive finisher as he takes up the role of lone striker.

This was a role that Theo Walcott found himself in at the beginning of the season, but injury problems and Giroud’s form means that he goes back to his winger role and will use his pace to run at and get behind the Manchester City defence. On the left wing, Joel Campbell is relishing his first team opportunities and will look to make an impact on this big game to enhance his credentials.

Aaron Ramsey and Mathieu Flamini start in midfield, instead of the dependable pair of Santi Cazorla and Francis Coquelin, and will have their hands full as they try to wrest the game away from Manchester City’s strong midfielders. Flamini will probably be deployed to handle the likes of Yaya Toure and Fernandinho, while Ramsey can surge forward to participate in attacking play.

Defensively, Arsenal can bank on some of their stalwart players at the back as they field their first choice defence, who will be looking to make sure that goalkeeper Petr Cech does not have to pull off too many spectacular saves for the Gunners. 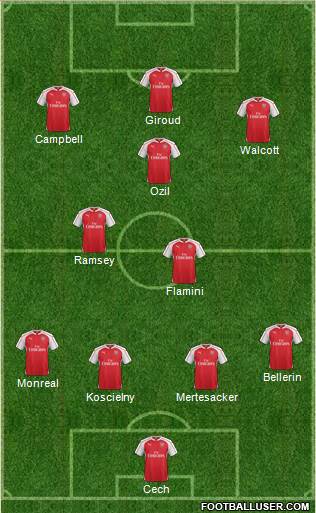 Manuel Pellegrini also has an injury headache in the form of Argentine striker Sergio Aguero, but will probably start him up front ahead of Wilfried Bony and hope that he can provide an early breakthrough for the Citizens. Aguero is still not fully fit and it is quite possible that the manager might take him off after half time.

In Kevin de Bruyne, David Silva and Raheem Sterling they have an intimidating mix of electrifying pace, mesmerising skill and attacking creativity.Manchester City have only scored 8 goals in their past 7 Premier League matches and this will be playing heavy on the minds of their attacking quartet.

Yaya Toure is a huge presence in the midfield and could well use this opportunity, where Arsenal are missing first choice defensive midfielder Francis Coquelin, to bully his way past the defence and inflict some damage on the Gunners.

Manchester City’s defence meanwhile is something of a problem for the team as they don’t look the same without Captain Vincent Kompany in the heart of defence. Otamendi and Mangala will look to be solid and cut down on defensive errors that may come back to haunt them. Left back Aleksandar Kolarov is one of the best in the league and one can expect him to cause trouble up front as well as fulfilling his defensive duties.

Joe Hart has been in impressive form this season and could well be called upon to make a few saves, given the lacklustre condition that the Citizen’s defence is in. All in all, the strategy for Manuel Pellegrini will be to focus on attack, so as to counter any advantages that Arsenal might take of their defensive lapses. 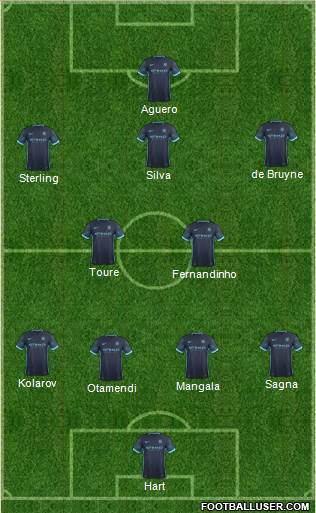 The German midfielder is on fire this season. He already has 13 assists and 4 goals this season and will be looking to add to the tally as he chases down fellow Gunner Thierry Henry’s record of 20 assists. He will play provider for Arsenal’s attacking players and could nick one himself.

This is also an opportunity for Ozil to come face to face with two other players renowned for assists, Kevin de Bruyne and David Silva, who will look to do the same thing for Manchester City as Ozil will do for Arsenal — that is to create attacks and it will be Ozil’s chance to put one over the City duo.

Judging from the attacking prowess of both these teams, this will be a high scoring affair and while Manchester City can boast of the stronger team on paper, their away form has been bad going into this match. They also have a tendency to leak goals and Arsenal might just take advantage of these factors to get that much needed win against the Citizens, even if by a small margin.