It was supposed to be a lifeline for Real Madrid before the match kicked off but after the match, Real Madrid had lost the title, not mathematically but certainly virtually. After nine years of being undisputed at home, 4 clubs and a record 150 games, Jose Mourinho finally lost at home. And out of all people it was Manolo Preciado, who had been accused by Jose for throwing the match away against Barcelona and aiding them in victory; but this time Preciado had indeed helped Barcelona to the title. Mourinho will surely admit that Madrid didn’t actually deserve a victory. With this loss, Real Madrid look shaken and Jose Mourinho will have to rethink his combinations and formations to ensure that Real don’t meet the same fate against the attacking minded Tottenham Hotspur.

Even the 'Special one' gives up

If it was supposed to be heart breaking for Real Madrid, it could not have been any better for the Blaugrana. Real Madrid lost at home to a relegation facing opponent and Barcelona beat Villarreal, one of the toughest opponents in La Liga at El Madrigal. Barcelona stepped onto the field without Messi but didn’t play their usual style of football yet managed to scrape through with a goal from Gerard Pique as Barcelona have their one hand on the Liga title. Only a miracle can stop Barcelona from lifting the title. On a different note, Victor Valdes and Sergio Busquets picked up “deliberate” yellow cards to ensure suspension against Almeria so that they start afresh against Real Madrid.

In other results, Valencia kept safe distance from Villarreal as they beat Getafe courtesy four goals by Roberto Soldado. Hercules won against Real Sociedad thanks to a brace from Royston Drenthe and Atletico prevailed against Osasuna. Levante continued their spirited comeback in the league as they beat Malaga.

Match of the Weekend

It was a strange week as both the giants of Spanish football didn’t play with their usual flair and creativity. The Atletico Madrid and Osasuna clash saw some good football and some tense moments as Osasuna managed to score the second goal and looked to score the equalizer too. With Sergio Aguero suspended and Diego Forlan on the bench, Costa led Atletico’s front line and scored a magnificent hat trick to win the game for Atletico Madrid and ensure their competition for the Europa league spot.

Major Upset of the Weekend

No prizes for guessing this one! Real Madrid played with very little creativity and tried a bit too much for Adebayor’s head to score and ended up losing. Angel Di Maria was effectively useless sans a glorious pass which couldn’t make its way to Adebayor’s feet. Higuain and Pepe were introduced in the second half as Mourinho shifted to a 3-4-3 formation with Higuain and Adebayor both missing glorious chances to score a goal. Sid Lowe in his column mentioned that Mourinho went up to the Sporting dressing room and congratulated Preciado on their unthinkable achievement. It was a toothless performance which was very unlike Real Madrid.

Goal of the Weekend

Before the kick off at Bernabeu, now retired Ronaldo, the Brazil and Real Madrid legend, was honored by the club for his services and even he would be proud of Miguel de las Cuevas’ finish to ensure Sporting’s victory against Real. His superb one-two with Nacho and his unstoppable finish to the right of Iker Casillas may very well have decided the fate of the La Liga.

Player of the Week

Soldado - At his best!

Getafe took the lead in the first half courtesy a Manu strike and were leading at the stroke of half time until Roberto Soldado decided to take charge scoring four glorious goals and ensuring that Valencia were ahead of Villarreal in the La Liga and also slowly cementing their place in the next year Champions’ League. 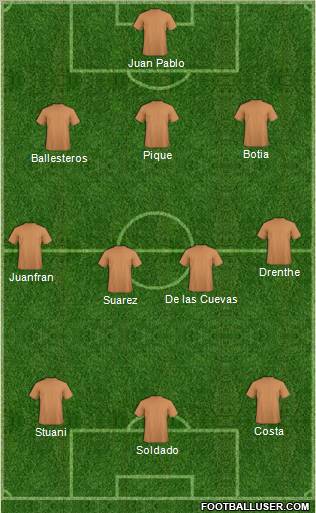