It was normal business for the Blaugrana this week as they beat Real Mallorca 3-0 which led Michael Laudrup, the Barca and Madrid legend, to proclaim that this Guardiola side is better than Cruyff’s Dream Team. But Real Madrid would be wondering what exactly went wrong at the Riazor as they drew a very important encounter against Deportivo allowing Barcelona to go 7 points clear of them again. Deportivo parked the bus and threw all their men behind the ball in the second half and Mourinho threw all his attacking players into the fray but still failed to win all 3 points and was visibly disappointed in his post match conference.

Valencia came back from behind to score twice and beat Athletic Club 1-2 at Estadio San Mames. Fernando Llorente opened the scoring for Athletic scoring in the 18th minute and then they managed to hold onto their lead until the 71st minute when Juan Mata scored off a superb Joaquin pass and then from nine minutes to time, a goal keeper clearance fell onto the feet of Jonas who tapped into the net and Valencia closed out the game and held onto their champions league spot.

Villarreal on the other hand dropped points against Racing when they drew 2-2 with Nilmar grabbing an injury time goal to avoid a loss at Santander. Espanyol brushed aside 4-1 at home as they now move 2 points clear of Athletic Club. Sporting de Gijon and Hercules drew 0-0 against Zaragoza and Getafe respectively and Levante beat Osasuna 2-1.

Match of the week

Atletico Madrid started in their usual attacking way against Sevilla and reduced Sevilla to only a few chances while Koke, Aguero and Forlan tested the Sevilla shot stopper on a few occasions. But just before the break, Sevilla drew first blood when Negredo smashed the ball past De Gea to give a 0-1 to the visitors. After the break, Atletico continued with their attacking brand of football and their persistence paid off when Koke headed a wonderful Forlan cross to restore parity and then both sides started to attack freely. But Sevilla again produced a delightful goal courtesy Rakitic who made it 1-2 in favor of the visitors. Atletico refused to go down without a fight as they attacked relentless and finally in the 77th minute, Reyes put a ball through Vargas making it 2-2. The two sides tried hard to win all 3 points but couldn’t break the deadlock in a terrific game of football. Easily, our match of the week.

Assist of the week

It was a week where many crosses led to goals off headers but one goal stands out in the midst of them all. A brilliant Sergio Busquets pass in the 58th minute to David Villa,who beat his marker and then beat his offside trap to finish in style. That was Xavi-esque in every way and reminded everyone of the passing abilities of Barcelona’s central defensive midfielder.

Goal of the week:

Sevilla resumed their La Liga ampaign after being knocked out from the Europa League. It was a thrilling end to end game with Atletico Madrid which also saw one the best goal of this week. Diego Perotti chested down a cross from Dabo at the edge of the penalty area cushioning a perfect ball for Negrado. With no hesitation, Negrado took a fierce volley across David De Gea. It was an unstoppable shot that gave the lead for Sevilla against Athletio Madrid.

Players of the week

When the world’s best midfielder isn’t beside you, there is a great weight on your shoulders to do your job effectively and Sergio did just that with minimal fuss. Spraying the ball around brilliantly, he made sure the Blaugrana kept ticking from the centre midfield and a glorious through ball to David Villa sealed the deal in his favor. Sergio has been one of the consistent players in the Blaugrana’s ranks and his effectiveness in midfield is often under estimated. Yet, he remains a priceless piece in the Blaugrana set up.

As Jose Mourinho unleashed probably one of the deadliest attacks in the world against Deportivo, Aranzubia was up to the challenge as he made some very good saves the most notable being off a Di Maria shot which he palmed away. He covered his goal well and did not allow Real Madrid any clear cut chances except the Ronaldo scorcher which hit the post and which can be attributed more to the Portuguese’s skill. A terrific outing for the Deportivo shot stopper.

Blunder of the week

Real Madrid threw everything they had against Deportivo and Cristiano and Adebayor could only find the posts. In the late second half, Alonso found Ronaldo on the right wing and Ronaldo made the run and passed the ball to Benzema with only the goal keeper to beat with a simple tap in. Instead, Benzema amazed everyone with doing something with the ball that only he could explain, costing Real Madrid 2 very costly points. Karim Benzema needs to step it up in every match and not merely once a blue moon. Surely, Mourinho would not have been happy with such an effort. 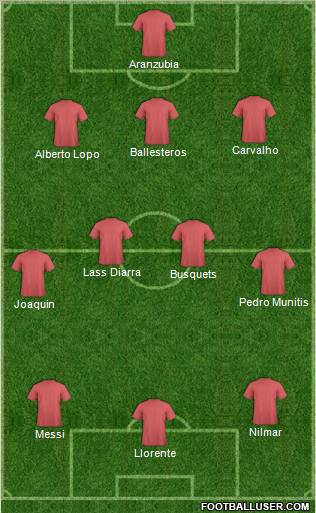 Results from the weekend