José Mourinho might claim that the title race is still isn’t over, but according to many, or rather most of the football world believe that Barcelona are going to be crowned La Liga champions come this summer. Los Blancos dropped two very crucial points at the Estadio de los Juegos Mediterráneo against Almeria in a rather abject display. It was even more ridiculous considering that Almeria are battling against relegation and had been poor since the start of the season. But Almeria defended very well and didn’t allow the creative minds in white any space to display some magic, and even went ahead in the 60th minute courtesy a Leonardo Ulloa strike. Granero came off the bench and equalized, but Real Madrid couldn’t score the winning goal. Cristiano Ronaldo came pretty close, but his ferocious free kick in injury time could only find the cross bar – summing up a disappointing night for Los Galacticos.

Later, Barcelona continued with their usual flamboyance, dispatching Manuel Pellegrini’s Malaga 4-1 and in the process setting the record for most number of matches unbeaten consecutively in all competitions – 28. Andrés Iniesta started the Blaugrana onslaught with a superb goal; then David Villa added a brace to his goals tally, and Pedro chipped in with the other goal. Messi as usual was at his fluent best, as his magical assist set up Villa for his first goal. He then produced another moment of magic, sliding past four defenders before passing the ball to Iniesta, whose deflected shot was tapped comfortably by Pedro. Malaga did manage to take some consolation, as Duda’s spectacular free kick beat Valdes and crashed into the back of the net. The goal did not go down very well with the Blaugrana, and Villa scored another goal to complete another comprehensive drubbing. Barcelona move four points clear of Real Madrid, and it is virtually Barcelona’s title to lose.

Villarreal managed to hold on to the third spot after a 4-2 victory over Osasuna at El Madrigal, thanks to some spectacular goals. Osasuna played well, but Villarreal produced a scintillating performance with goals from Capdevilla, Cani, Rodriguez and Marcos Ruben. Borja Valero produced another midfield master class with two assists, continuing his good run in the league so far. After a fabulous game last weekend, the Osasuna goal keeper, Ricardo couldn’t match his previous outing, delivering a lack-luster performance.

After Villarreal managed to win, the pressure was on Valencia to close down the gap on third spot. Los Che didn’t disappoint the home fans, as they won 2-0 comfortably against Deportivo. In other matches, Hercules lost 2-0 to relegation battlers Sporting Gijon; Hercules’ off field financial problems look far from settled, and it could be a severe blow to the club if the top players in their ranks move on to other clubs because their dues weren’t paid. Real Sociedad managed to close down the gap between them and Sevilla to one point, having beating Getafe  away by a 4-0 scoreline and Sevilla having losing 1-2 to the other side from Catalonia, Espanyol.

After a superb display against Real Madrid which ended in a defeat for the yellow submarines, Borja produced another brilliant performance at the heart of the midfield, as he ran the show for Villarreal and made two assists to cap off a wonderful night for Villarreal.

Match of the week: Villarreal vs Osasuna

It was a great match, with some eye-candy goals and excellent team play. Osasuna tried valiantly to hold back Villarreal, but the Yellow Submarines, thanks to their terrific players and tactics, managed to secure a much deserved win at El Madrigal.

Goal of the week: Cani

El Madrigal witnessed a stunning goal, which is definitely worthy of a goal of the year nomination. In the 50th minute, Cani, in a central midfield position in his own half, received the ball and let it fly over the Osasuna goalkeeper Ricardo Lopez. It was a stunning goal which summed up an exciting match. Later,Cani said he scored a similarly spectacular effort as a youth player at Real Zaragoza.

“You attempt these goals but they only rarely come off, I saw the keeper slightly off his line and luckily it turned out well”, the 29-year-old told reporters.

The wonder strike put Villarreal back in front after Osasuna had canceled out Marco Ruben’s opener.

Flop of the week: Ricardo (Osasuna)

After making it to the THT team of the week last week, it was a performance least expected from the Osasuna shot stopper. He was helpless as Villarreal banged in four goals past him, which included a spectacular far distance goal by Cani that looped over him into his own net.

The Race for the Pichichi: 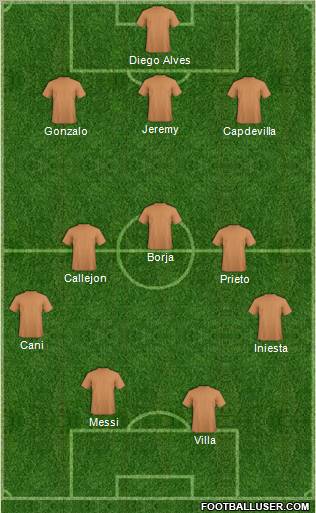