You are here: Home » Spanish La Liga » Barcelona » Messi, PiquA�, Fabregas And Pedro: Future Of Barcelona Is In The Safe Hands Of La Masia Golden Generation of 87
Football News 24/7 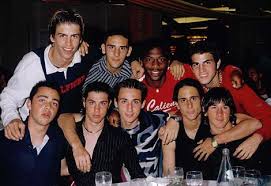 The La Masia Generation of 87

FC Barcelona have been dominating European football for the past few years (with two continental doubles in the past three seasons), mostly thanks to an absolutely miraculous generation, or rather generations, of La Masia players peaking at the same time. Lionel Messi, AndrA�s Iniesta and Xavi Hernandez were the top three players in the last edition of the Ballon d’Or and they are all proud products of La Masia, which is quite remarkable to say the least. What are the odds of the three best players in the world all coming through the same academy?

While Barcelona have got to where they are now thanks to hard work and a great football vision, there has also been an element of luck involved. Statistically speaking, the chances of talents such as Puyol, Xavi, Messi, and Iniesta all coming from the same academy and peaking at the same time are very, very low and it’s something that will probably never happen again; it’s safe to assume that Barcelona (or any other team) will not assemble such a talented squad any time soon, at least not through their youth academy.

However, while key players like Carles Puyol and Xavi Hernandez are approaching the twilight of their careers, Barcelona still look likely to remain on top for long. Even by La Masia’s very high standards, the generation of 87 is a truly splendid one, miraculous even. Back in the beginning of the noughties, three young boys born in 1987 shined in Barcelona’s youth team: Lionel Messi, Francesc Fabregas and Gerard PiquA� (and Victor Vasquez, who ended up not making the same jump as the others). This side is widely regarded as the best in La Masia history, they often beat their opponents by eight or even ten goals.

La Masia has produced many great players over the years, but never four world beaters (Pedro joined some years later) born in the same year. This generation dominated at the youth level and they look ready to set the world alight in the first team as well.

a�?In my time in charge, I have never come across a group as ambitious and competitive. Not just in matches, either, but almost more so in practice. Sometimes, I had to apply the brakes. They treated practice sessions as if they were finals. And they were a brilliant squad,a�? recalls Alex Garcia, the long-serving coach of Barcelona’s youth teams.

A decade later, all three are together again. PiquA� and Fabregas played in the Premier League for a few seasons, but with Fabregas’ return this summer the La Masia class of 87 is together again and ready to make its mark. These three players (and Pedro, who was also born in 87 but joined La Masia later) are now 24 with the best years of their careers ahead of them (even Messi, who is already the best player in the world). When club legends such as Xavi and Puyol, who are also the cluba��s current captains, call it a day, the generation of 87, along with the likes of Iniesta and Busquets, will be the spine of the new Barcelona team, a spine that pretty much guarantees that Barcelona will remain strong for many years to come.

While the addition of top outside talent has obviously played an important role, homegrown talent has been the key behind Barcelonaa��s success and thata��s not about to change. Through their homegrown talent Barcelona ensure that they remain true to their famous football philosophy, implemented by Johan Cruyff in his tenure as a manager at Barcelona.A� Even if Cesc Fabregas is not able to emulate Xavia��s career, he is a player who understands football in the same way as Xavi does and he will make sure Barcelona will keep their identity. The club will probably never manage to assemble a squad like the current one again, but constant stream of homegrown talent ensures that they can continue fighting for every trophy even after their legends retire. A�After all, ita��s not exactly bold to predict that a spine of Gerard PiquA�, Cesc Fabregas, Pedro Rodriguez and Lionel Messi is likely to succeed, is it?

All these players are among the best in the world at their position and are already important members of the squad, but their peak years are yet to come. They will be the leaders of the next great Barcelona team and keep Barcelona at the top of world football.

2 Responses to “Messi, PiquA�, Fabregas And Pedro: Future Of Barcelona Is In The Safe Hands Of La Masia Golden Generation of 87”