You are here: Home » Around the World » FC Porto – The Champions: What Lies Ahead For Portuguese Football?
Football News 24/7

‘Remember Red, hope is a good thing, may be the best of things and no good thing ever dies.’

If only, Domingos Paciencia had caught a few glimpses of Shawshank Redemption ahead of his team SC Braga’s monumental moment in European football history, he may well have found the right words to say to his players. The occasion was nothing less than a tryst with destiny for the Braga based club. After securing the unprecedented runner-up position in the Portuguese Liga during the 2009-10 edition, the team made it to the biggest stage in Europe at the cost of an old horse like Sevilla only to be eliminated from the first round; however not failing to impress one and all by breathing down the neck of a team of Arsenal’s stature. Following their reduction to the Europa League knock-out stages, Braga, it appears, were on a mission to establish a legacy in Europe by going past teams like Liverpool and Benfica to set a date with compatriots FC Porto in an all Portuguese affair in Dublin. Against the juggernaut programmed by a genius called Andres Villas-Boas, Braga were walking on the thinnest of hopes and having already gone way past the expectations set out of them, they should have been the more nonchalant of the two teams with virtually nomore pride at stake.

Not that Paciencia’s men have been a revelation in adding new dimensions to the attacking brand of football, but they have been a fairly hard-working unit all through their journey in Europe this season. They overcame the bigger teams in the competition by the narrowest of the margins but that grit they called upon to produce moments of brilliance was never out of stock – something that went missing from their performance in the finals. Perhaps, the aura of the occasion got the better of them and against a team that has nurtured a culture to succeed in Europe, it was too big an ask for Braga to defy the odds. Much surprisingly though, Porto too were overwhelmed by the importance of the occasion and chose a pretty uncharacteristic no-nonsense approach for the game – doing just enough to secure the title that now places them at a position to complete a treble with a victory in the Portuguese Cup final in three days’ time. Their midfield’s impeccable knack in establishing a ruthless channel to form a continual supply of passes to the forwards had apparently gone missing and that flawless connect was nowhere to be seen. However, one piece of sheer class where Guarin delivered an inch perfect ball from yards out of the box that immaculately passed over the Braga defenders and met the Colombian beast Falcao who has not put a single foot wrong in this tournament sealed the deal for Villas Boas. Falcao netted in his 17th goal of the tournament and the party began as Porto went on to be champions of Europe for the first time since that emphatic triumph in Champions League in 2004 under the tutelage of Jose Mourinho. 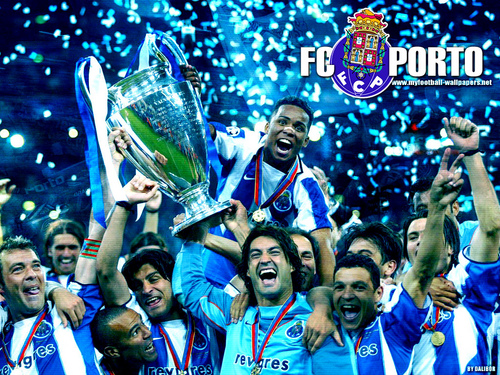 What Does the All-Portuguese Final Mean to Football in the Country?

The relevance between the strength of a domestic league carries little significance in determining the dominance the teams from that particular league may enjoy while in Europe simply because the format of a league competition greatly differs from that of a cup tournament and the required skill-sets too differ with the change in format. However, the greater number of teams from one league at higher level of segregation in a European cup is nevertheless a delightful sight and is definitely reflective of the basic strength of these sides, if not the league as a whole.

The presence of as many as three English sides in the Champions League semi-final stages on a regular basis in the latter half of the previous decade speaks volumes for the quality of English football during the years. The Italian sides progressed seemingly almost by default in the European competition during the 90’s and there were multiple instances of an all Italian final in the erstwhile UEFA Cup during the decade. The tradition was carried on a little further as Milan, Inter and Juventus secured three of the four spots in the semi-finals during the 2002-03 edition of Champions League where Milan and Juventus further went on to set an epic clash in the finals.

The success of the Portuguese sides in the recently concluded Europa League may not be perceived as an indication of shift in power. It may not garner as much media attention as teams from more celebrated leagues would have. However, one must acknowledge the grand announcement these teams from the Iberian Peninsula have made of their arrival in Europe. They no longer make up the numbers and it’s high time the established teams began to take them seriously. These teams are more than just party-poopers for the big names in Europe.

FC Porto’s Prospects on the Rise in Europe

The pattern of the usual Big Three is already appearing to have changed in Portugal after a second continuous indifferent season for Cristiano Ronaldo’s youth club Sporting CP. However, the current Porto unit are by all means a class above the other two forming the big three. Their success story, both in the domestic circuit and in Europe has not gone unnoticed to the managers in the more fancied leagues and a number of their players and the manager too are on the radar of quite a few clubs.

Despite the constant buzz over his future, nothing significant seems to be materializing at least this summer and in all likelihood Andres Villas-Boas will stay put with the Portuguese champions. Provided, Porto hold on to a major chunk of their success carvers, the genius behind this renaissance may replicate what Jose Mourinho did in 2004 after winning the UEFA Cup with the same group of players a season prior to that.

The key lies in the formidable attacking triumvirate of Hulk, Falcao and Guarin. Should Porto retain all the three architects of their limitlessly triumphant season, there are bright chances of carrying this form in Europe. The current attack is pretty strong on physical attributes but some reinforcements are needed to add subtlety in the defensive midfield and defence. Porto have in recent past managed shocking results over the likes of Manchester United and Arsenal but have fallen short on the thickness of their squad to turn the results into their favor over two legs. This squad appears potent enough to break the shackles. How far Villas-Boas takes this squad in Europe, only remains to be seen.

Benfica, Braga & Sporting – The other players

A year ago, Benfica claimed the Portuguese league title but failed to translate that form in Europe. The chief reason for their downfall was their inability to hold on to the best players in their squad who in quest for greener pastures parted ways with the club. Angel Di Maria, Ramires and David Luiz moved to the bigger names over a span of six months and it will only be a matter of time before Fabio Coentrao follows the suit. Though Benfica went as far as the last four in the Europa League, the loss of one talent after another is not making their job any easier. In the present conditions, they should aim to rebuild the squad around the academy graduates and scout for some more unknown players in Latin America – a region that has bolstered the Portuguese league for some time now.

Braga’s journey has been nothing short of a fairy-tale but it is almost certain that Domingos Paciencia will switch loyalties, come the summer. The ex-Porto striker is being touted as tied with Lisbon based club Sporting CP who require a man of Paciencia’s credentials to raise a Porto-esque revolution. With what he has achieved with Braga in this short yet productive spell, it is safe to assume Sporting will reclaim their prestige sooner than most predict. And with more number of teams inspired to stage a revamp, the competitive culture in the league can only prevail.

No Big Names but Strong Teams

Financial constraints in the country are no more a secret. The general health of Portugal both in terms of financial and social stability is far from pleasing at the moment and the football clubs too are not spared. The decreasing number of spectators present during the league games in the stadiums could not have been more evident. As a consequence, the clubs have been on a low in terms of revenues and have been forced to set alarming limits on their spending.

The recent European success has been received as a breath of fresh air and this may turn few things for the better. For some years now, the local players from the Portuguese contingent have all left for England, Spain and Italy with brighter prospect in sight to do justice to their potential. The academies have continuously produced gifted players who have taken the national team to the greater heights but the league has been chiefly riding on the caliber of South American players.

One factor that works brightly in favour of these teams is the presence of a large chunk of Brazilians among many of them. The players from Brazil adapt easily to the Portuguese culture and the absence of any sort of language barrier makes the manager’s job relatively easier when inducing the sense of a ‘team’ among the players of varied origins.

The primary aim at this stage for the better teams in Portugal – apart from Porto – should be to make it big in continental competitions. The fact that the tier-2 teams from bigger leagues are allegedly uninterested in the Europa League, the likes of Braga and Sporting could capitalise on this opportunity and earn higher monetary rewards. The world has taken notice of this giant leap the league has taken. There is no dearth of quality players among the top ranked clubs but effective club management and retention of talent is quite evidently the need of the hour.