You are here: Home » COVER STORY » English Premier League Review a�� Round 5: A Week Of Missed Goals, Own Goals And Great Goals
Football News 24/7

It has been a goal feast this weekend at the Barclays Premier League, with the ball hitting the back of the net 38 times in 10 matches. In what was one of the most craziest weekend in recent memories, all the newly-promoted sides won their respective matches as Manchester United continued their title march with all its title rivals dropping points.

The weekend kicked off at the Ewood Park, where Blackburn hosted Arsenal. It was a weird match with the home side winning it 4-3 at the end. Song and Koscielny scored an own goal each as Arsenal dropped down to the 17th place in the table. The match started with a protest by the Blackburn fans against the management, but after this thrilling result not many of these protesters were to be seen! At the Villa Park, Aston Villa were denied three points against Newcastle after a second half goal by Leon Best as the visitors maintained their unbeaten start to the campaign. In another close match, Bolton hosted newly-promoted side Norwich City. A moment of madness from Klasnic saw the home side being reduced to 10 men. The Canaries held on to their first victory of the season, beating the home side 2-1.

Everton welcomed Wigan Athletic at the Goodison Park. In the first half, Di Santoa��s strike was cancelled out by a goal from Jagielka, but two late goals from Vellios and Drenthe gave the David Moyesa��s side its first home win of the season. At the Liberty Stadium, Swansea ended their goal scoring drought with an emphatic 3-0 victory over West Brom. The result saw Swansea moving out of the relegation zone and West Brom dropping down to the bottom of the table.

QPR pulled off a comfortable victory against Wolves by 3-0, as the newly promoted side jumped up the table to ninth. New captain Joey Bartona��s early strike along with goals from Faulrin and DJ Campbell ensured the away side an easy victory.

Tottenham hosted Liverpool at the White Hart lane on Sunday. In a dramatic turn of events Liverpool were reduced to 9 men after Adam and Skrtel received their marching orders. The home side dominated the match with numerical advantage as Adebayor scored a brace. Luka Modrica��s wonder strike gave Tottenham the lead in the 7th minute and a goal from Defoe in the second half put them in the driver seat.

At the Craven Cottage, Fulham completed an unlikely comeback to claim a draw against Manchester City. Sergio Aguero scored in each half as City took a comfortable lead against the London side. Bobby Zamoraa��s strike at the 56th minute started the comeback and Danny Murphya��s 75th minute goal gave Fulham an unlikely point. In another match Sunderland claimed all three points against Stoke with a crushing 4-0 victory. Their victory would ease the pressure on Steve Bruce as his side were also helped by an own goal by Jonathan Woodgate.

In what was the biggest match of the weekend, Manchester United played Chelsea at the Old Trafford. The home side put up a terrific first half display and went ahead by three goals at the break. Chris Smalling opened the scoring with an header from a free kick. The lead was doubled by an absolute belter of a strike from Nani. Rooney completed the rout in the first half with a calm finish in the closing minutes. Chelsea came out strong in the 2nd half, with Fernando Torres opening the scoring for them. Torres went on to miss a host of glorious chances as Chelsea failed to make any further inroads.

Here is the look at the best and the worst of the weekend.

Stars Of The Weekend:

Nani (Manchester United) a�� The Portuguese winger has been in brilliant form this season. He not only scored from an absolute thunderbolt of a shot that left Cech stranded, but also won a penalty for his team. Nani looked dangerous all afternoon down the wings with his pace and trickery. Ashley Cole was beaten time and again as the former Sporting man produced a a�?Ronaldoa��esque performance.

Nani on the rise

Luka Modric (Tottenham Hotspurs) a�� The little Croatian hasna��t been the most loved person in recent times among Spurs faithful. His transfer saga has put him on the receiving end of some stick from the fans. Things have changed quickly after yesterdaya��s match though. Modric put in a magical performance as he ran the show in the midfield, scored a brilliant goal and even managed to get cheers from the fans. What a turn around!

Nani gets his second mention this weekend for his absolutely marvelous strike against Chelsea. The winger received the ball on the right, then cut inside jinking past Mata like he wasna��t even there. He continued his run forward and then let fly a wicked shot from 25 yards out. Cech could only stand and admire the goal. Breathtaking!

Modric gets a mention over here as well for his brilliant strike against Liverpool. Defoe was dispossessed on the edge of the penalty box and as the ball rolled towards Modric, he smacked it from 20 yards out into the top corner – a net buster!

Nicolas Anelka bags this award for his wonderful defense-splitting pass to Fernando Torres against Manchester United. Anelka, who was on as a substitute in the second half after replacing Frank Lampard, assisted a goal that the Englishman would have been proud of. Anelka received the ball on the right and then cutting inside played a wonderful through ball in behind the Man United defense. Torres timed his run perfectly and scored after lifting the ball over De Gea.

An honorable mention must go to Alex Song for his assist in Gervinhoa��s goal this weekend. Song played a lovely ball through the middle of the defense to release Gervinho, who didna��t make any mistake and finished it calmly.

Save Of The Weekend: Shay Given (Aston Villa)

Given rolled back the years with his performance against Newcastle on Saturday. He made some terrific stops throughout the match against his former employers. The highlight among all those saves was a fantastic reaction save from a Steven Taylor volley. It was an instinctive reaction from Given that allowed Newcastle to maintain their unbeaten start to the season.

Miss Of The Weekend:A�Fernando Torres (Chelsea)

The Spaniard gets this dubious honor this weekend. Torres raced clear of the Man United defense after receiving a wonderful ball from Ramires with only the keeper to beat. He did the hard part pretty well, as he rounded of De Gea with ease, and then with the empty net at his mercy, he somehow unthinkably shot wide and missed a goal which could have turned the match on the head.

A special mention should also go to Wayne Rooney for his penalty miss in the same match. The Englishman slipped as he went to hit the ball sending the ball into the stands. A certain John Terry might have had a wry smile on his face.

Controversy Of The Weekend

The match between Manchester United and Chelsea served up some controversial moments throughout the match. Referee Phil Dowd and his linesmen at Old Trafford made some dubious decisions in the match. Chris Smalling gave United the lead after heading home from an Ashley Young free-kick. The replays showed that Smalling was offside when the ball was played in. The linesmen were under the spot light once again as United took the lead through Nani. The Portuguese winger scored, but was found to be in an offside position when he received the ball from Jonny Evans in the first place.

Another moment of controversy was created when Ashley Cole made a horrific tackle on Chicharito. The Mexican was trying to follow up a Wayne Rooney shot which hit the cross bar. Cole went flying in with a late challenge on Chicharito. He didna��t get any of the ball, but got all of the striker. Strangely, he was given only a yellow card and United were not awarded a penalty since the ball has gone out of play when this tackle came in.

It was a mixed afternoon for the Arsenal midfielder as in one moment he was putting Gervinho through on goal with a wonderful assist and in another moment he was picking up the ball from the back of the net after scoring an own goal. Ruben Rochina floated in a incautious delivery from a free kick on the right. A�The ball bounced around the six yard box and Song seemingly under no pressure, somehow managed to deflect it into his own net with his knee. This mistake turned the game on its head as Blackburn went on to take the lead and finally won the match.

Special mention should also go to Jose Reina and Laurent Koscielny for their respective blunders as well. While the Spaniard spilled a shot from Defoe allowing Adebayor to score his first goal in the match, Koscielny completed a brace of own goals by Arsenal after guiding the ball into his own net from an Olssona��s cut back.

Team Of The Weekend: 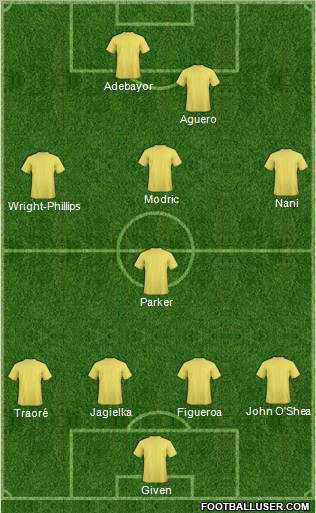 4 Responses to “English Premier League Review a�� Round 5: A Week Of Missed Goals, Own Goals And Great Goals”