Indian national football team recently concluded their two month long preparatory camp in Lisbon, Portugal as a part of their project “Goal 2011”. The team went for the European camp on 30th June and spent the month of July training at a camp at Vierra, 200 km away from Lisbon. This was the fourth consecutive trip of the “Bhangra Boys” to Portugal and they ended the trip with a satisfactory tally of 6 wins, 2 draws and 2 defeats.

Out of the 30-man squad initially picked by Bob Houghton, only 28 were able to participate in the friendlies as Indian skipper Bhaichung Bhutia and defender Samir Naik had to head back home due to illness. Bhutia was diagnosed with Thyroiditis on July 16th and although he joined back the camp a month later, he is still lacking match fitness. 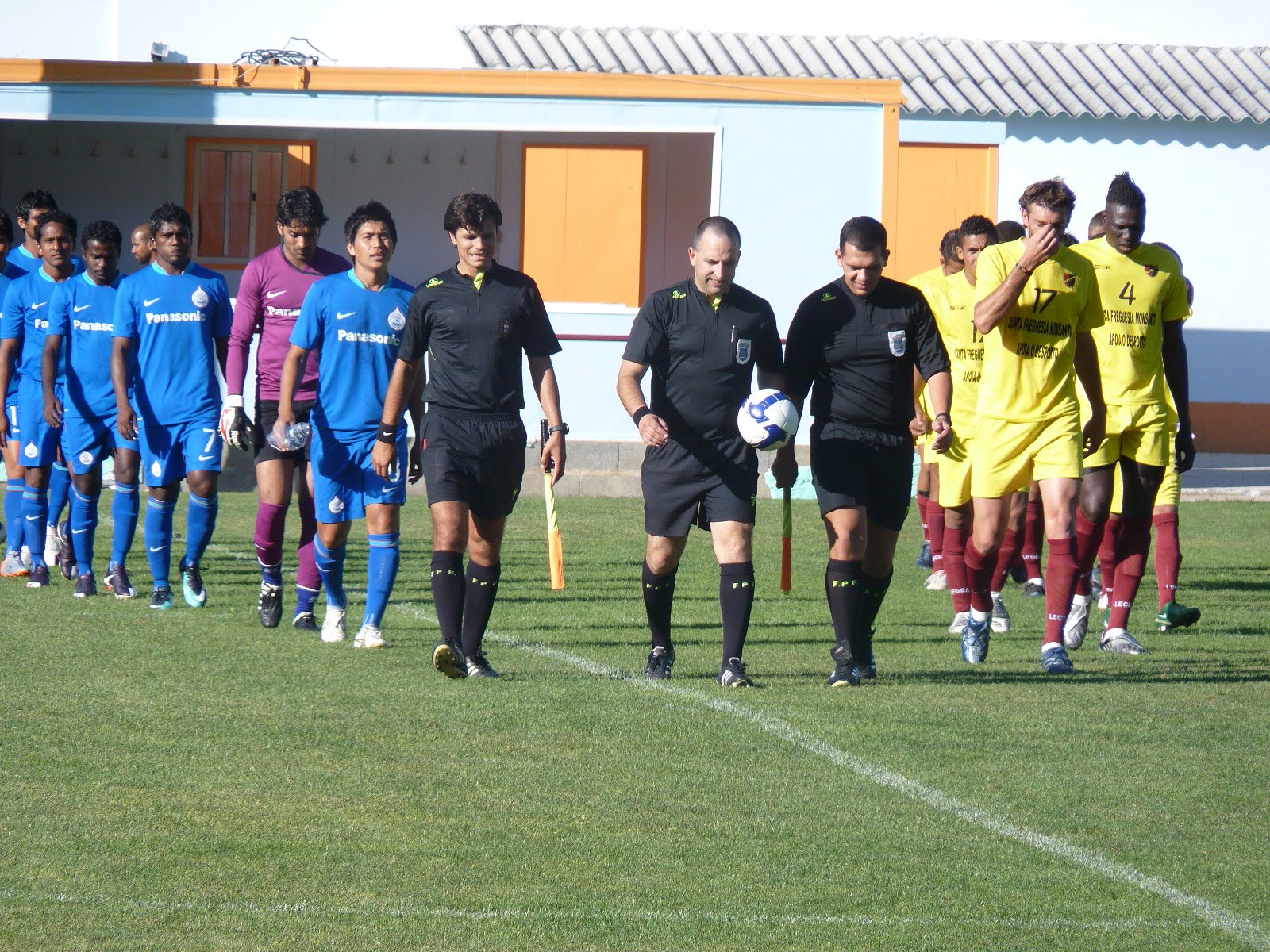 Team India taking on one of the Portugese second division clubs

India played their first match against Caldas SC under the stand-in Captain Rennedy Singh and secured a comfortable 4-1 victory over the Portugese second division club. They continued with an impressive 6-2 win over GDR Monsanto in the second tour match. After a hat-trick of wins, India suffered their first tour defeat in the hands of Su Sintrense in their fourth encounter by a solitary goal margin.

Meanwhile star striker Sunil Chettri joined the squad after taking time off from his MLS team Kansas City Wizards, but yet India had to wait for their sith fixture against Real Massama to get back to the winning ways after drawing the fifth encounter. The last four matches saw India losing one to CD Mafra and winning two with the last one against Odivelas FC ending in an one all stalemate.

Here we take a glance at what all lessons we have learnt from this Portuguese camp in all our departments.

Bhutia flowing back in mid July and Chhetri  being busy with Kansas City Wizards meant that we had to be without the services of our lethal striker duo for the training camp. Although Chhetri was released by Wizards in early August to be a part of the national camp, but this gave an opportunity to our attacking substitutes Abhishek Yadav and Mohammed Rafi to show their prowess.

The pair of Yadav and Rafi faired well in the first half of the tour with Yadav scoring two goals in his six appearances. Yadav was exceptional in the air but injured himself in the match against Uniao Serra. Rafi, who was on his first European trip netted four goals and was the star of the Indian front line as he formed a comfortable partnership with different striking combinations.

Injuries to  the dependable first choice  mid-fielders proved to be a thorn for the Indian team in this tour. Steven Dias and Climax Lawrence, both of whom would have been an indispensable part of our staring eleven, missed quite a few of the tour matches owing to injuries. This was a golden opportunity for our younger crop of players to shine, but Rakesh Masih and Jagpreet Singh couldn’t do justice to their selection in the main team. Even though they were without any on-field mentors, but they should have taken this occasion with arms wide open, but unfortunately they failed fill in Steven and Climax’s boots. Veteran play-maker Renedy Singh had to carry the entire midfield burden alone in his broad shoulders and he did admirably well.

Defense did not look quite convincing in the tour games and some experienced defenders were caught off guard quite a few times, as they conceded sloppy goals against third and fourth division Portuguese teams. Govin Singh and Mohanraj didn’t impress much in the backline and it seems they will have to warm the benches for some more time. It was evident that Surkumar Singh, Gouramangi Moirangthem, Anwar Ali, N.S. Manju will form the first choice backline with veteran Deepak Mondal and Mahesh Gawli as their able substitutes.

Bob Houghton shuffled his goalkeepers in different tour games and all three of them, Subrata Pal, Subasish Roychowdhury and Arindam Bhattacharya performed well in the matches they played. Pal is by far the first choice keeper for Houghton, but with the improvements shown by Bhattacharya in the recent months, it will be a mistake on the part of Pune FC goalkeeper if he takes his place in the National team for granted. 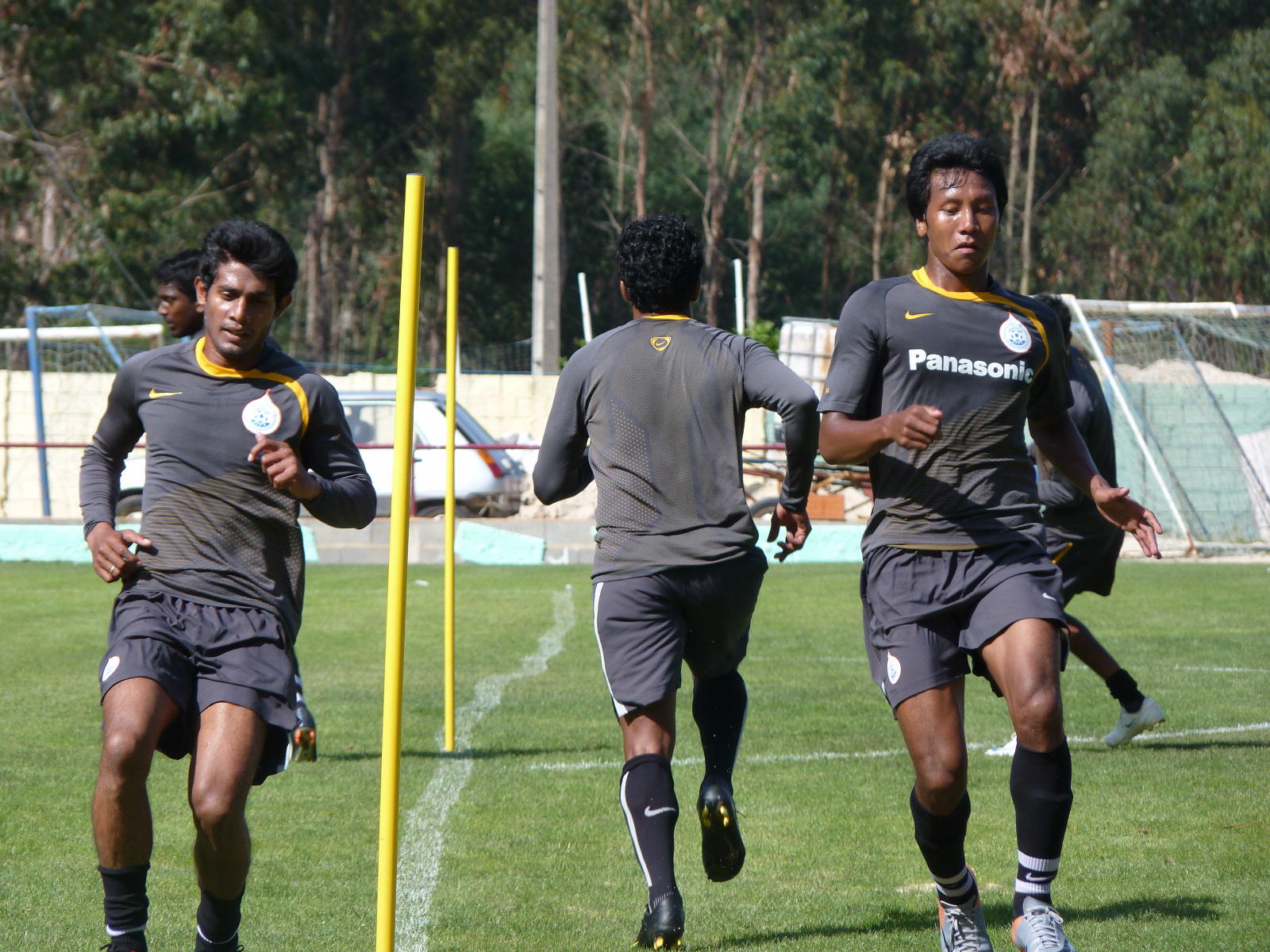 One of the practice sessions

Bob Houghton had stated before leaving for Portugal that India will surely play one friendly match against a club from the top flight – something he and AIFF failed to deliver. With as much as seven friendlies promised in the month of September, only two have been confirmed, both against 104th ranked Thailand. AIFF is trying to arrange few African nations for the friendlies and Namibia has been confirmed as one of the teams visiting our country in September, but the Englishman is a bit reluctant to play against African nations and has instead insisted for a couple of friendly camps with the clubs from Western Asia, keeping an eye on the Asia Cup. With Asia cup scheduled in early January and India set to face the likes of Australia, South Korea and Bahrain in the group league matches, it’s high time the management gets their act together and provides our national team some decent international sides to practice with. Bob has to be given credit for the progress Indian football has made under him in past few seasons, but not even his loyalist will agree with him on his call for more camps than international friendly matches.

[Special thanks to snunp for the pictures and videos]